Sheila Pree Bright is an acclaimed fine-art photographer known for her series Young Americans, Plastic Bodies, and Suburbia. Her documentation of responses to police shootings in cities across the US inspired her book #1960Now: Photographs of Civil Rights Activists and Black Lives Matter Protests.

This photo essay bears witness to a time of grief and reclamation that arose with the death of George Floyd only to deepen with the loss of Rayshard Brooks in Atlanta, Georgia. Artist and photographer Sheila Pree Bright shares intimate moments of mourning and inspiration in the Black Lives Matter movement, images that evoke the civil rights era and its leaders. 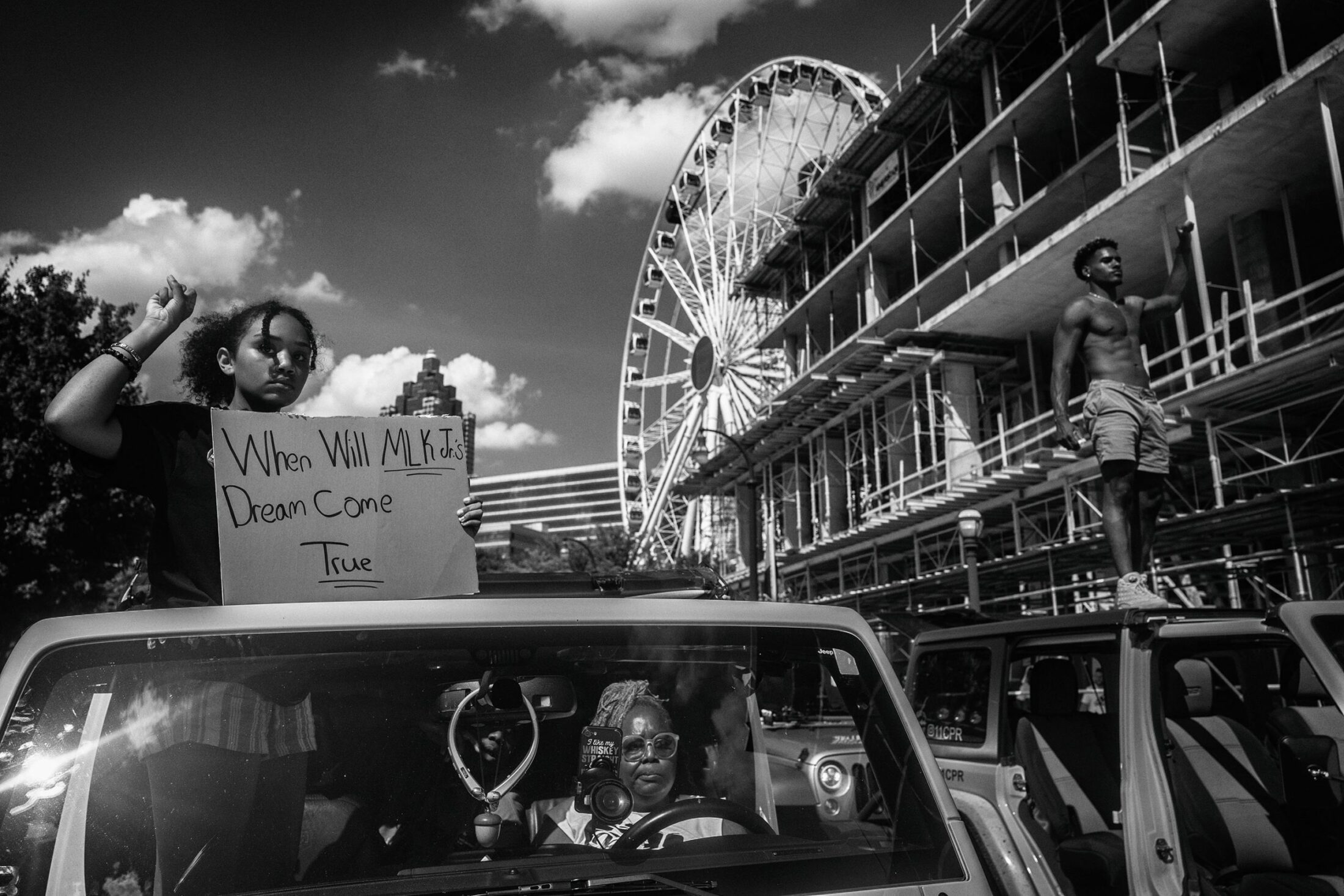 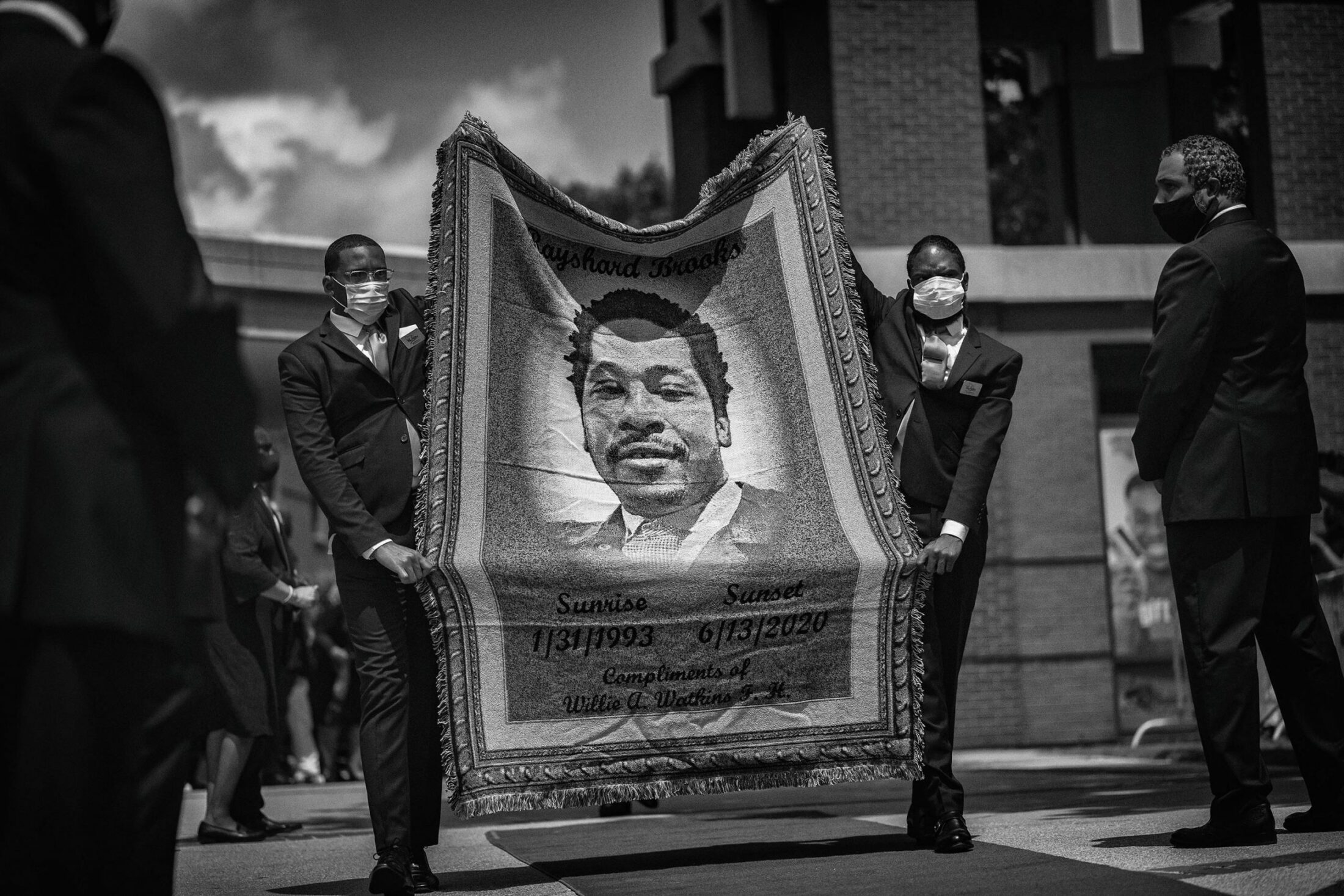 A portrait of Rayshard Brooks woven into a tapestry is held up during his funeral at the historic Ebenezer Baptist Church. 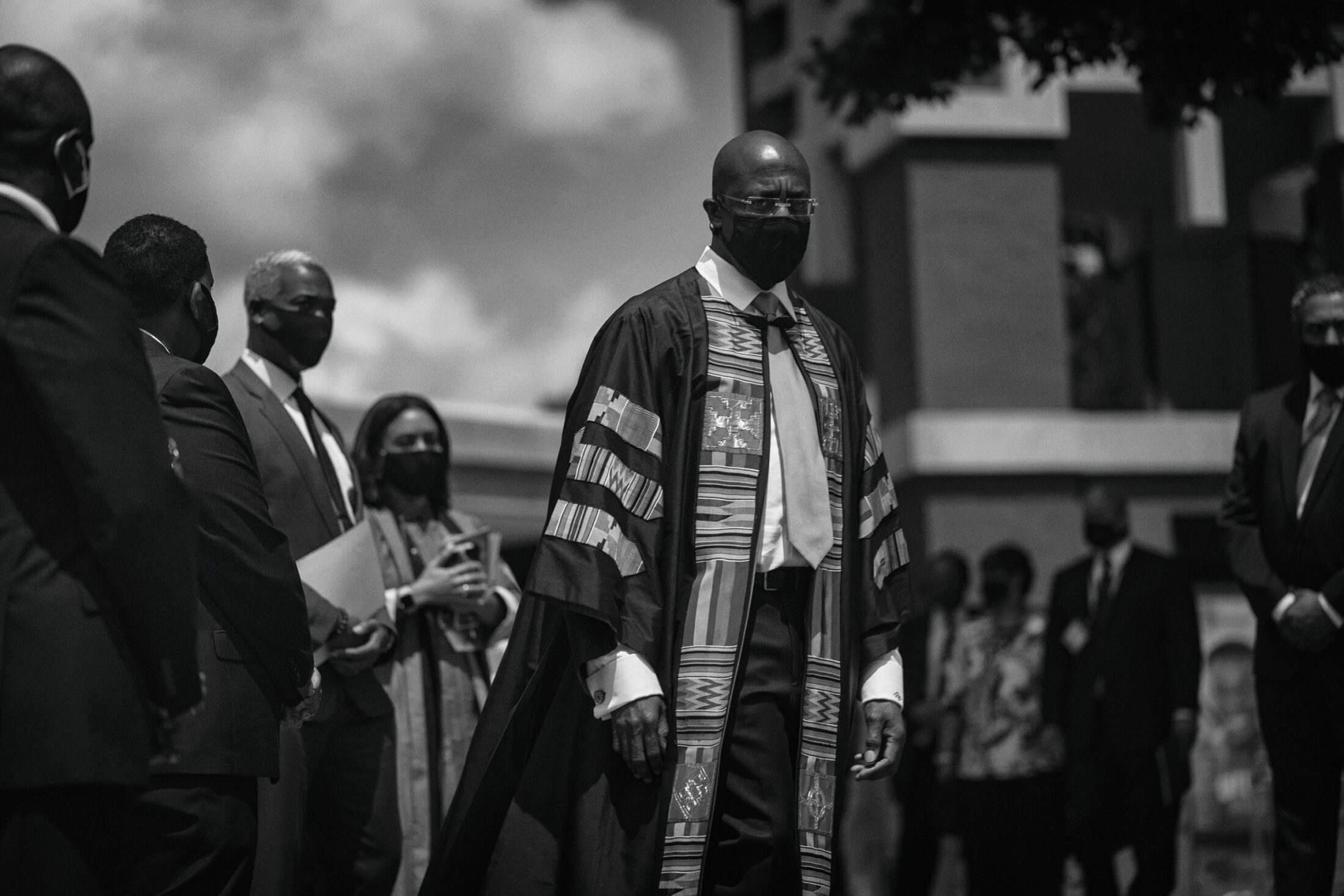 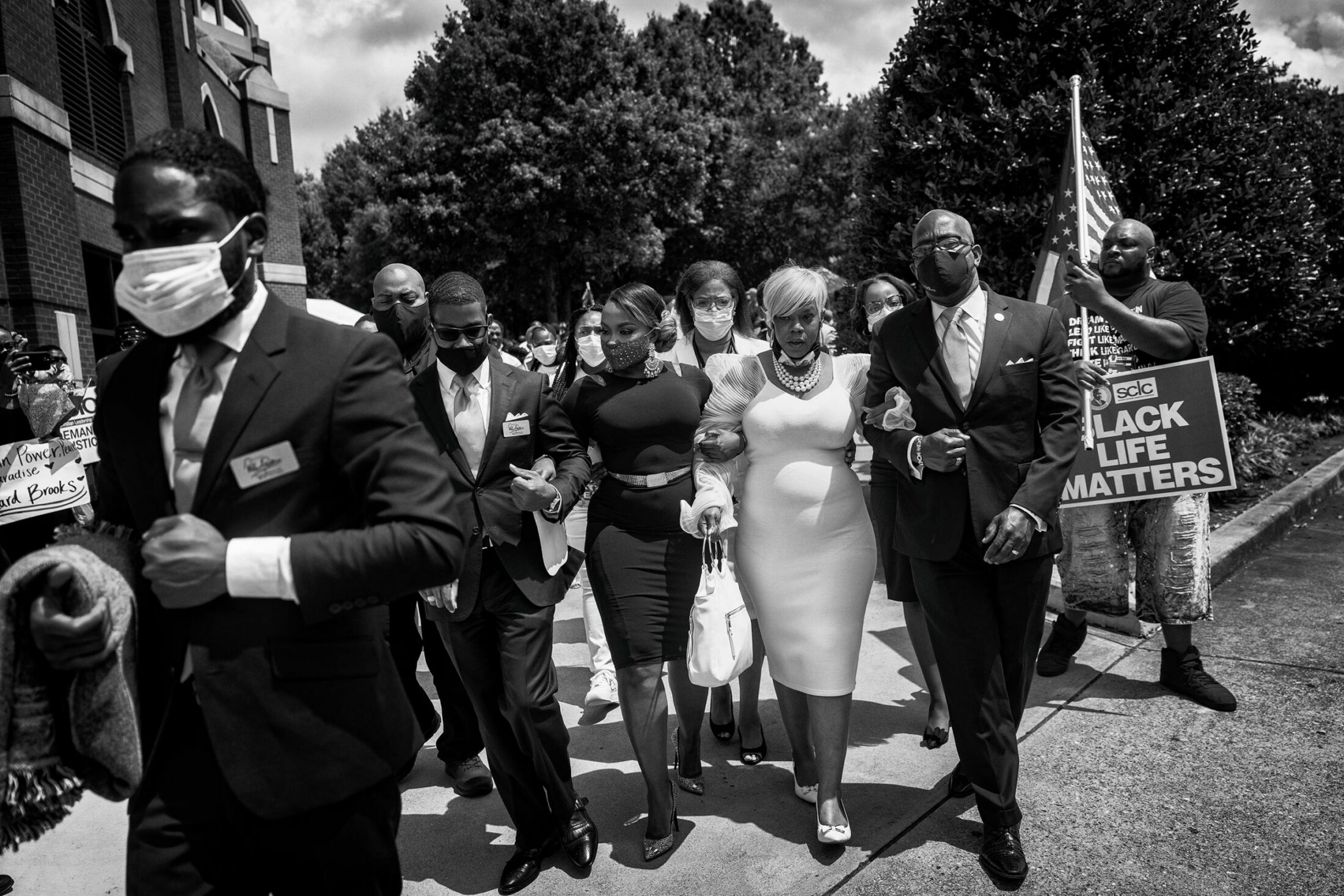 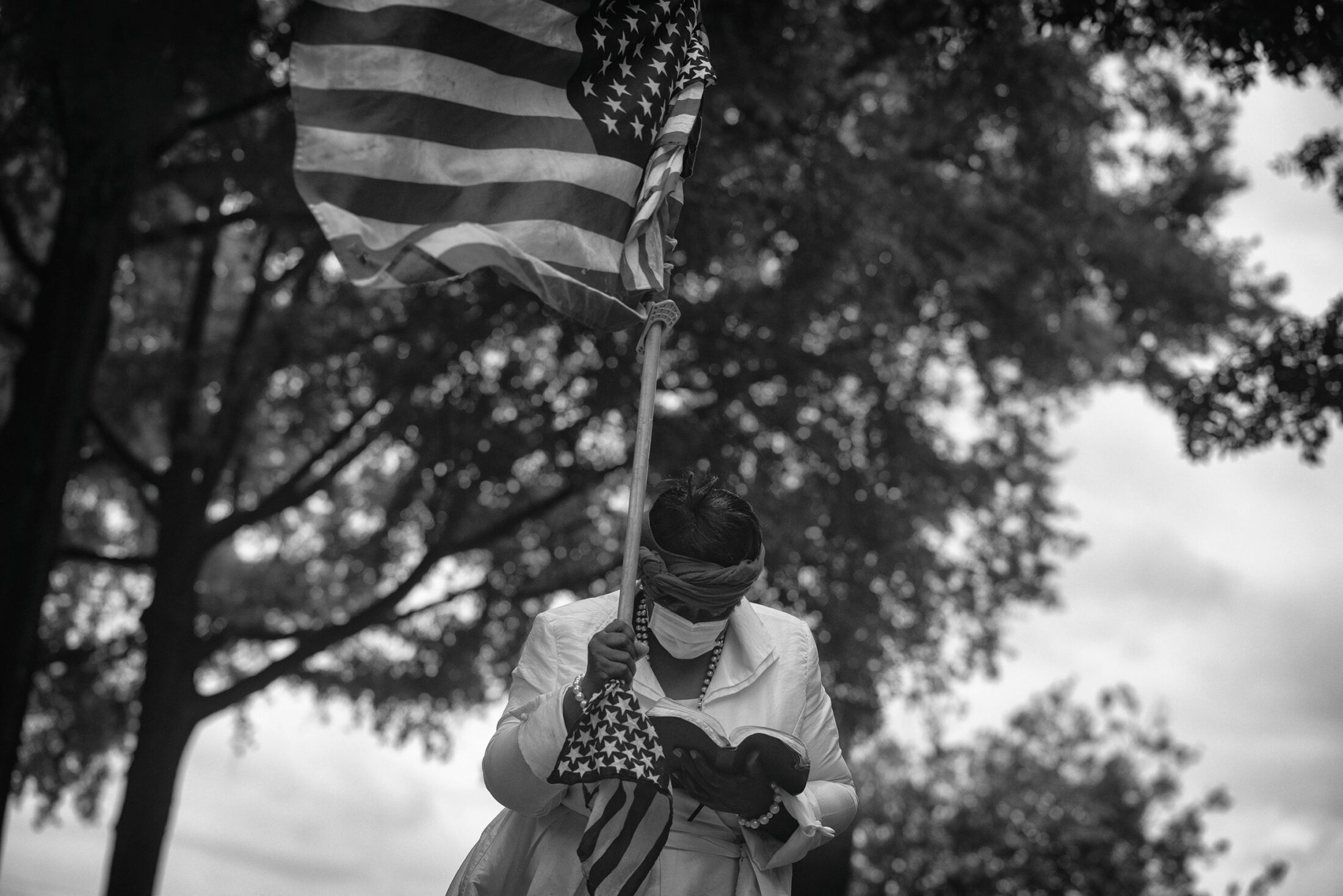 A woman outside of Rayshard Brooks’s funeral reads from the Bible while holding up an American flag. 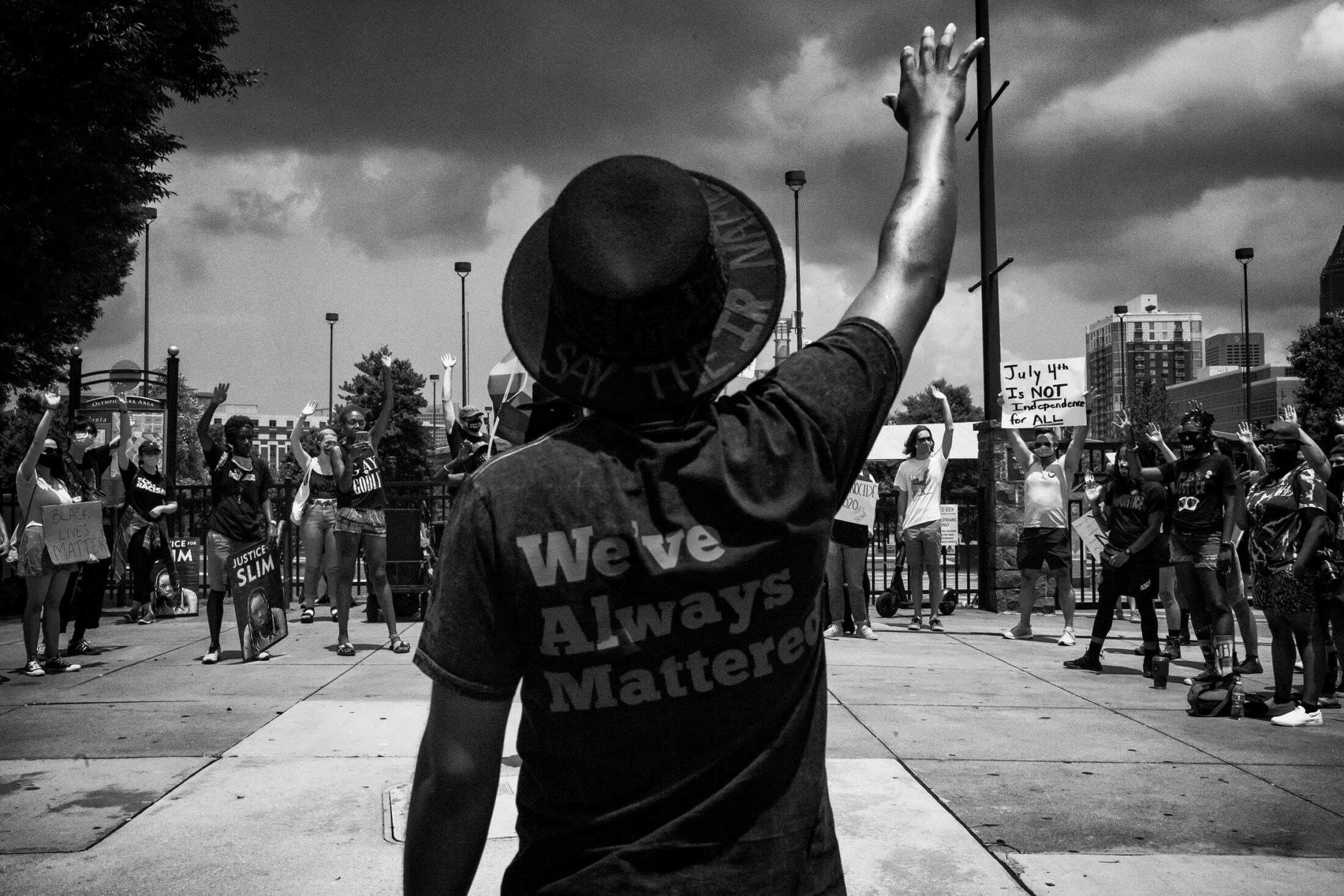 FXCK July 4th rally to cultivate change and liberation from injustice and police brutality toward women and LGBTQ+. 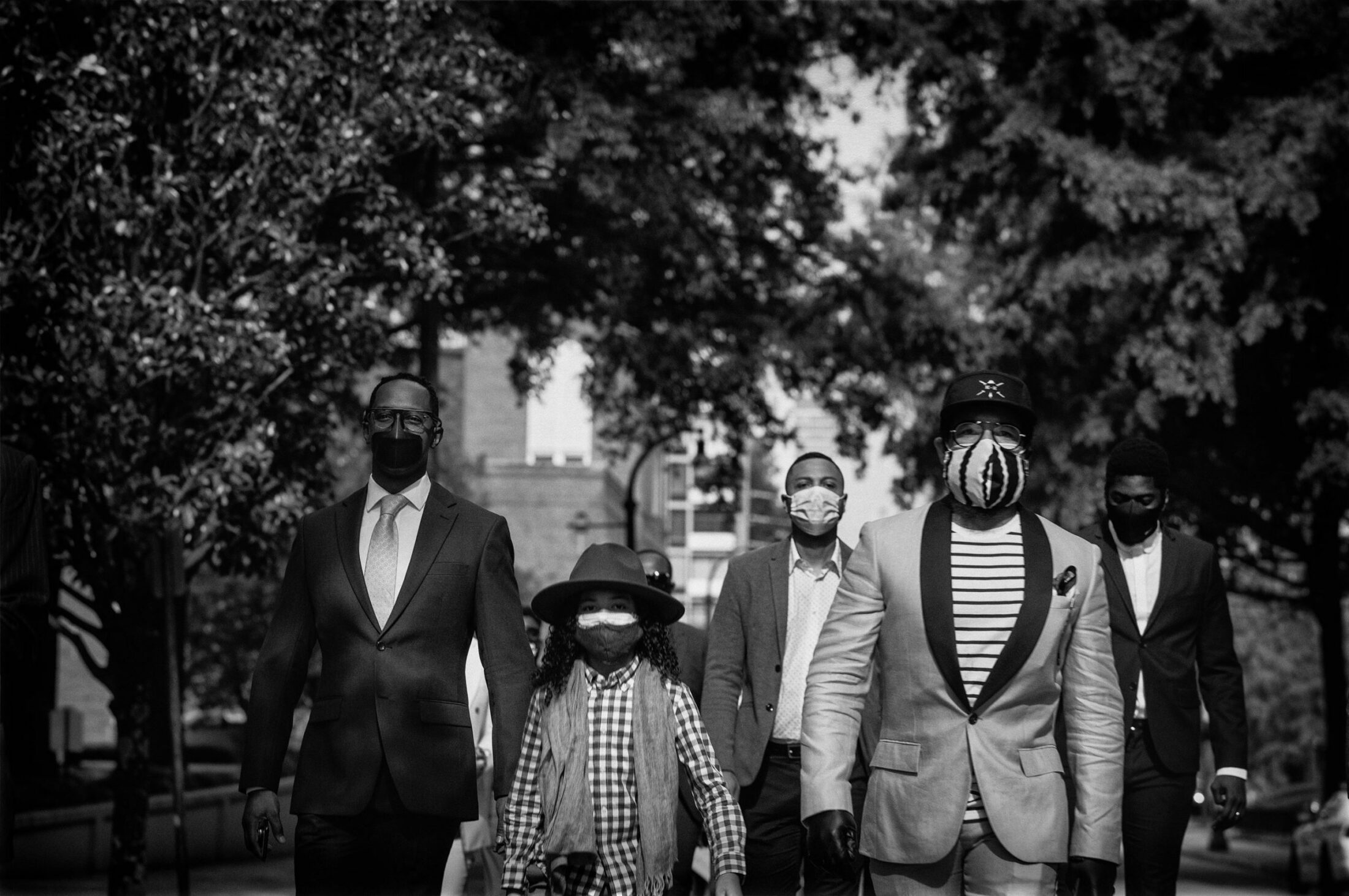 Black men suited up for a silent march walk together as brothers in solidarity from Ebenezer Baptist Church to Dr. Martin Luther King Jr.’s birth home. 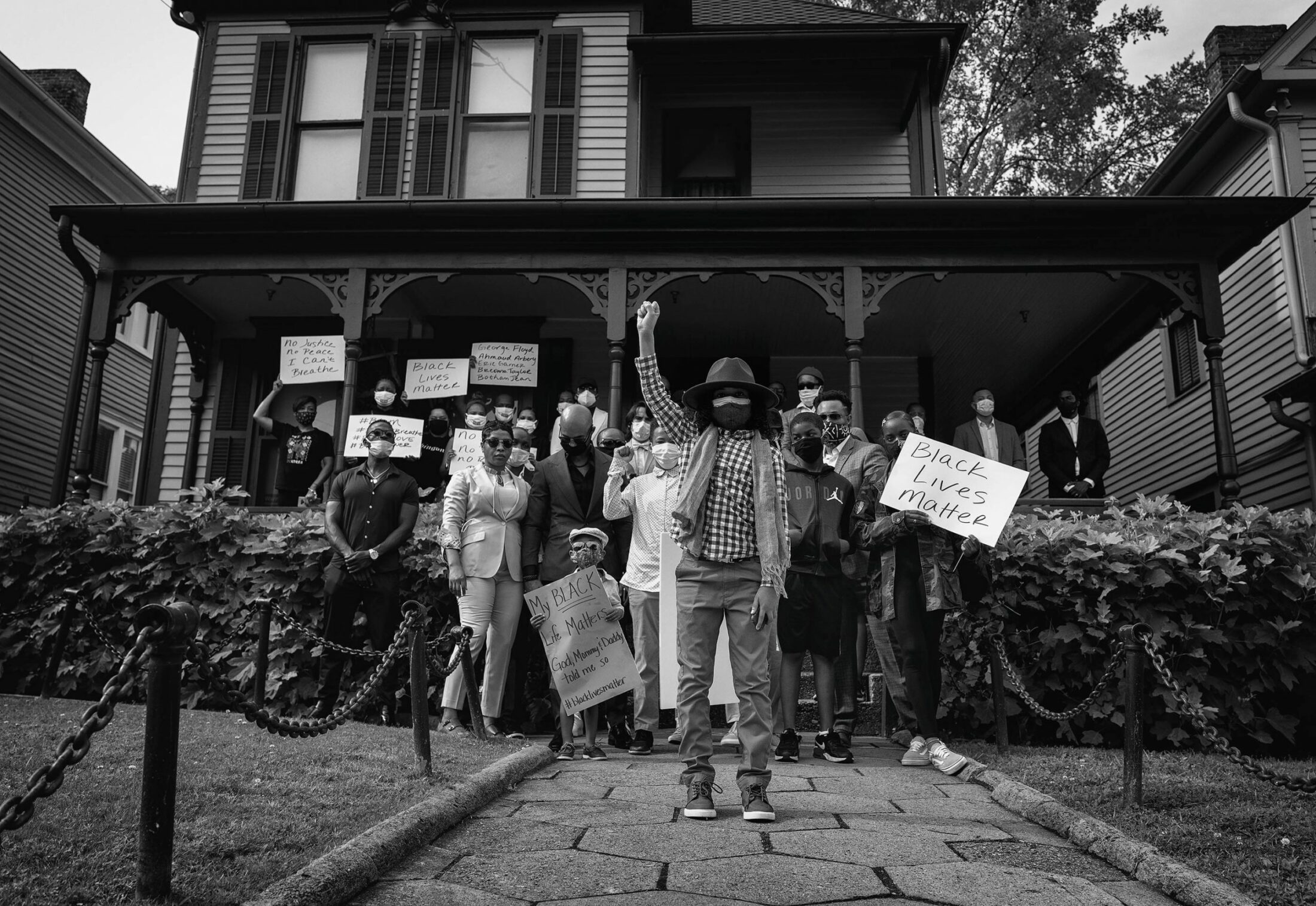 At the close of the silent march, brothers arrive at Dr. Martin Luther King Jr.’s birth home on the historic Auburn Avenue and stand with community. 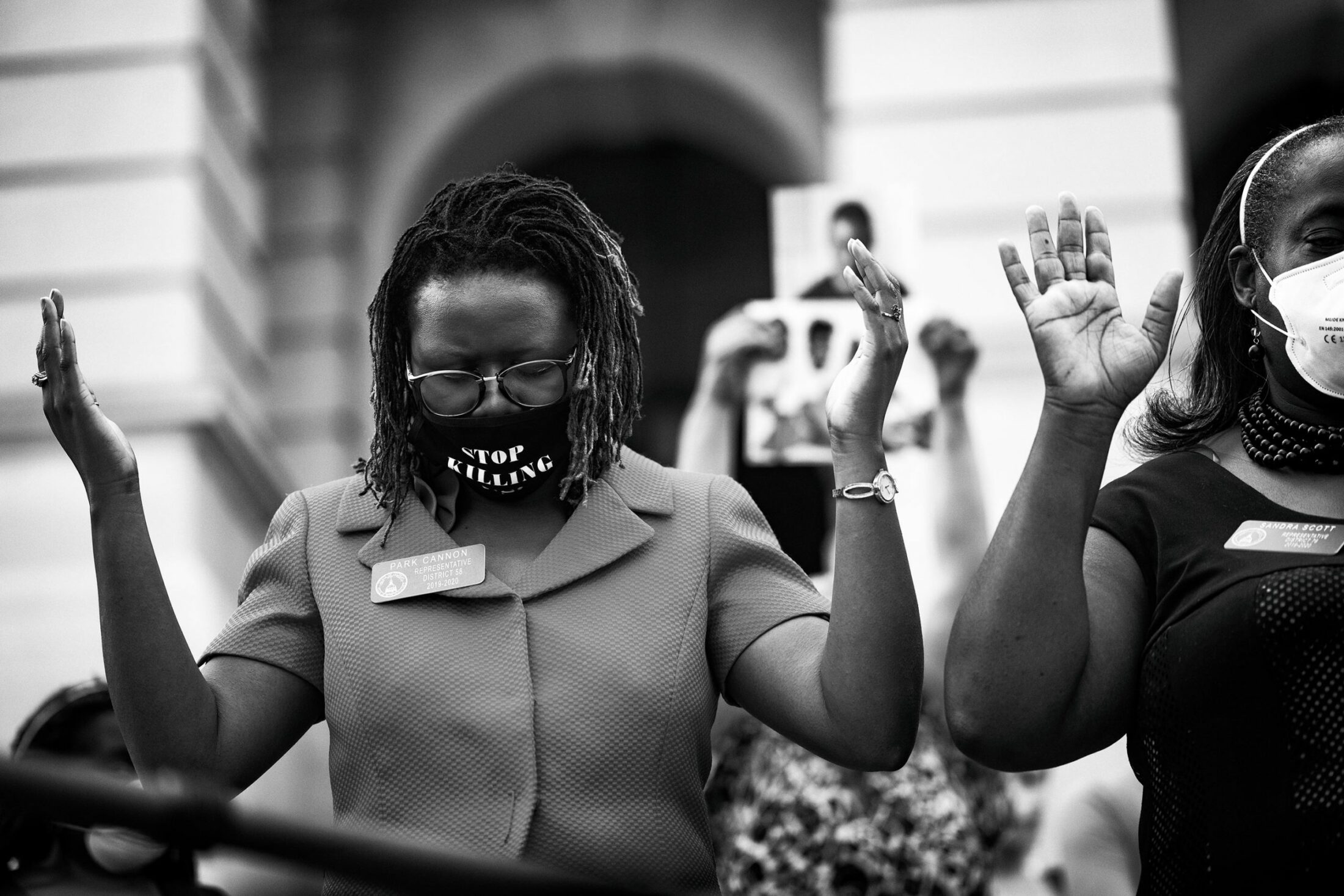 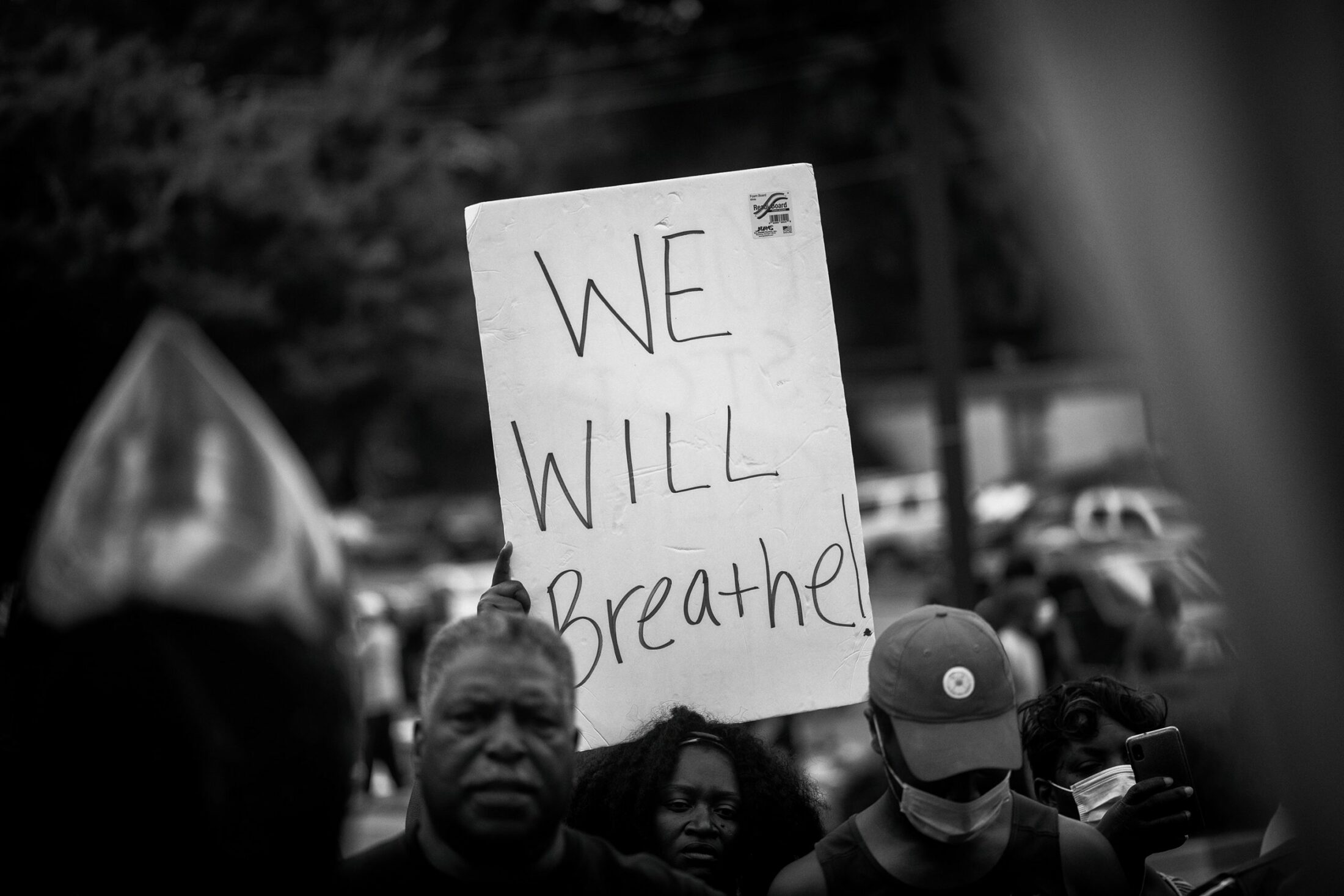 A woman holds up a sign at a memorial for Rayshard Brooks.

In 2012, Trayvon Martin, an unarmed seventeen-year-old Black teenager, was fatally shot in Florida by George Zimmerman. The following year, after Zimmerman was acquitted of second-degree murder and manslaughter, protests erupted around the country, and the hashtag #blacklivesmatter started a new civil rights movement. I felt compelled to be there on the ground and document what was happening in the communities of Atlanta, Baltimore, Ferguson, Baton Rouge, and Washington, DC. I wanted to know for myself what the neighborhoods were experiencing versus what the media was reporting to the masses. I photographed in black and white, shooting mostly with a portrait lens to show the depth of the trauma Black bodies have been experiencing generation to generation. I thought about my parents, who grew up in the Jim Crow era: imagine their trauma. My thoughts at that time led to the photo series collected in the new book #1960Now: Photographs of Civil Rights Activists and Black Lives Matter Protests.

Then, at the end of May 2020, the death of George Floyd sparked one of the most massive uprisings in modern American history: protests erupted in fifty states and twelve countries, amplifying the Black Lives Matter movement globally. Over the next month, I followed several events in Atlanta, GA: a Juneteenth gathering, the memorial for Rayshard Brooks, a walk to Martin Luther King Jr.’s house, a press conference held by grieving mothers, and a July 4 protest. “We Will Breathe” is a series of images from that time.

The images I photograph create contemporary stories about social, political, and historical contexts not often seen in the visual communications of traditional media and fine art platforms. The #1960Now series is a continuation of my work presenting aspects of our culture—and sometimes counterculture—that challenge the typical narratives of Western thought and power structures. In the words of the late Congressman John Lewis, “We’re going to survive and there will be no turning back.”

by Andreas Gefeller
September 18, 2018
Emergence Magazine’s Newsletter
Thanks for signing up for our newsletter (: