In Search of the Black Tents

Diane Barker is a photographer and artist, based in Worcestershire in England. For the past twenty-five years, her work has focused on the Tibetan people and, in particular, Tibetan nomads. Diane has shown her work extensively around the UK, as well as in India and New York, and has work in private and public collections around the world.

On the grasslands of the Tibetan Plateau, the Drokpa people are working to maintain and restore their traditional nomadic way of life, even as they face harsh resettlement policies, desertification, and modernization. Diane Barker offers an intimate portrait of four of these families. 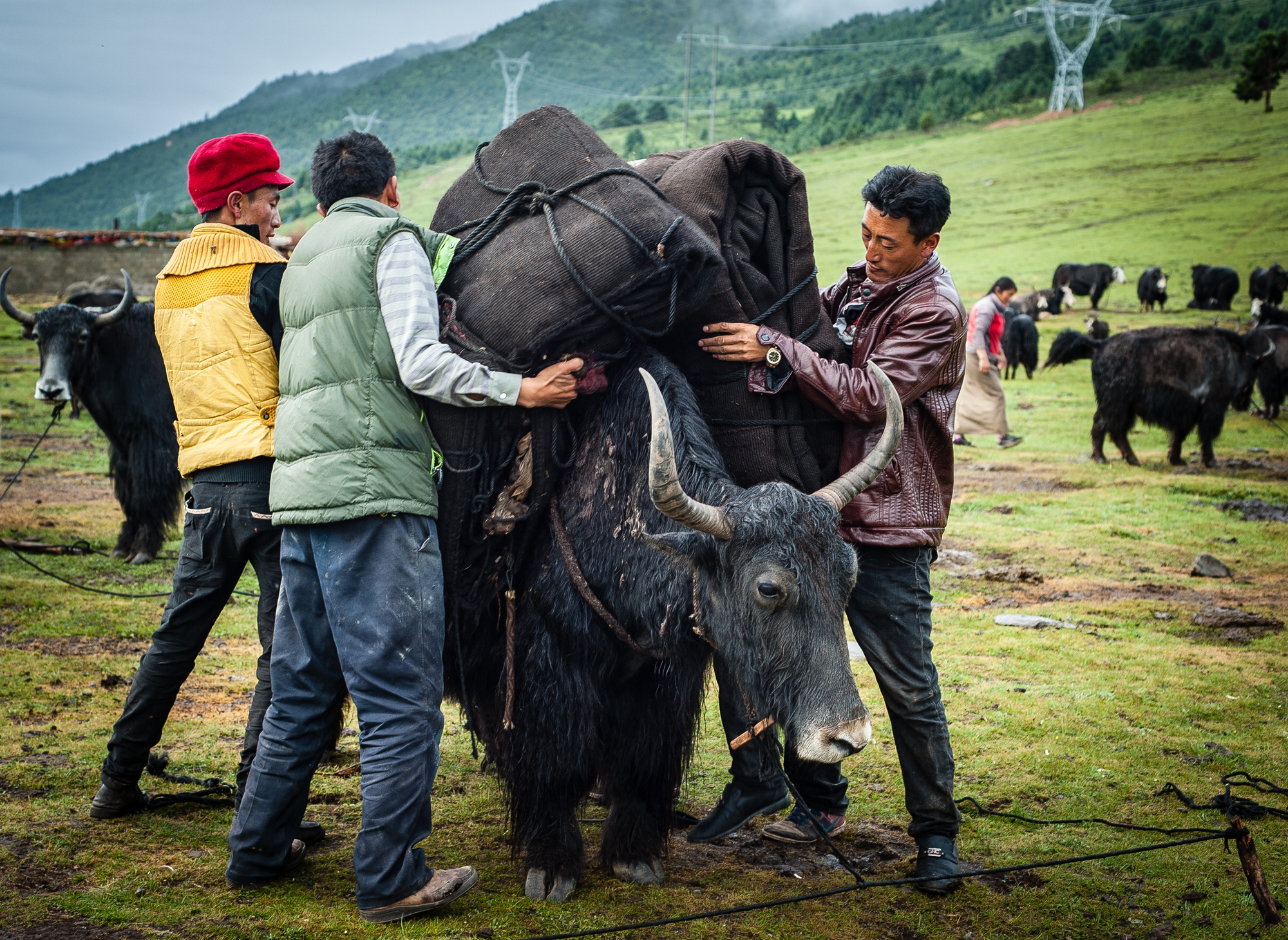 Here we see a few men of the Yulong Rongchen nomadic community in Kham preparing a ba the traditional black yak-wool tent, for transport to summer pastures in Ramashong Valley. Like early Tibetan temples, Drokpa tents are made to resemble the body of a turtle. Warm and dry with good ventilation, 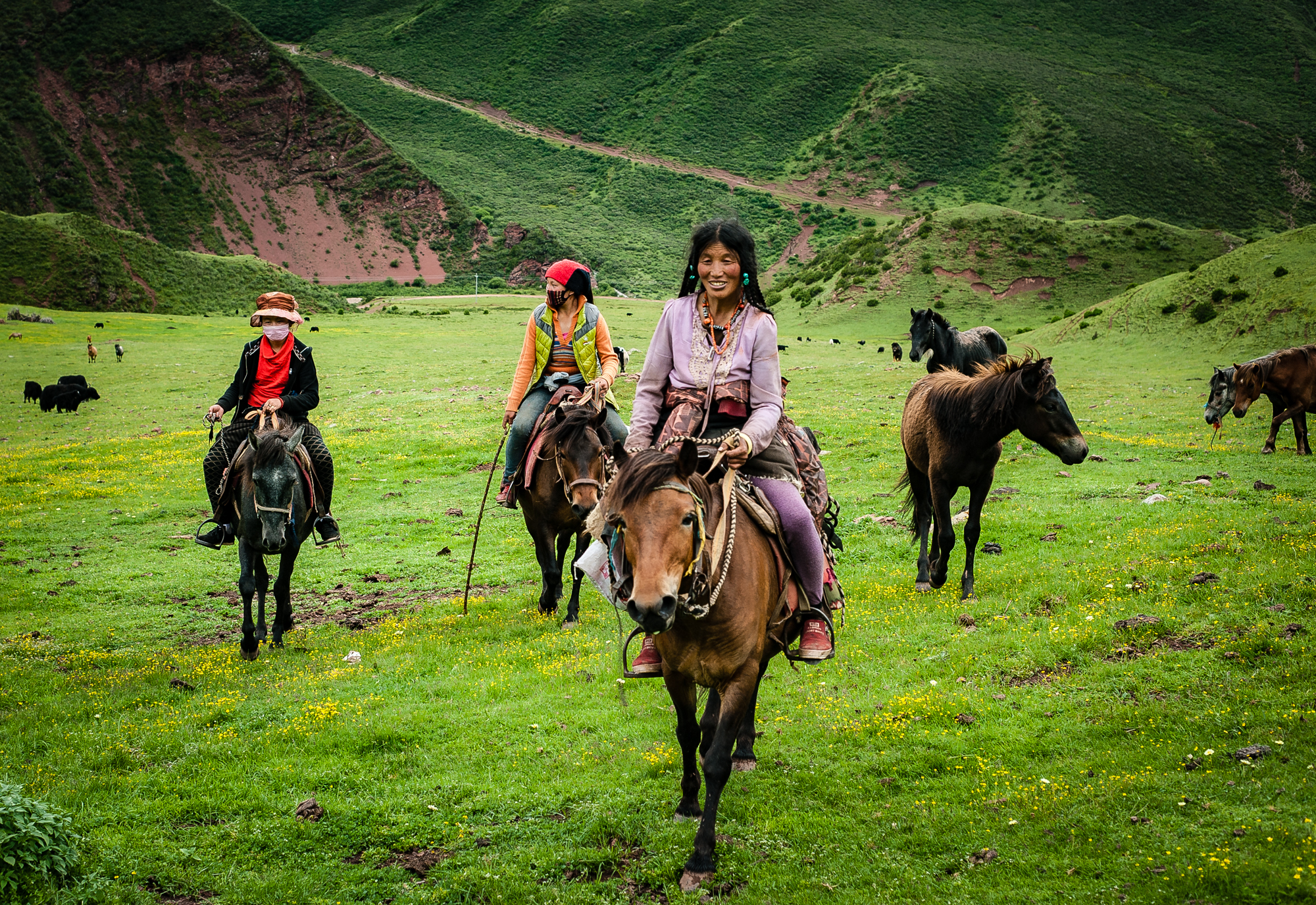 Palmo, of the Yulong Rongchen nomadic community, arrives at the summer camp with her daughters, all of whom have spent the entire day on horseback driving their herd of yak from the spring pastures. Palmo’s husband traveled by motorbike, the preferred form of transport for men. Motorbikes are known in Tibetan as trul ta, or “motor horse.” 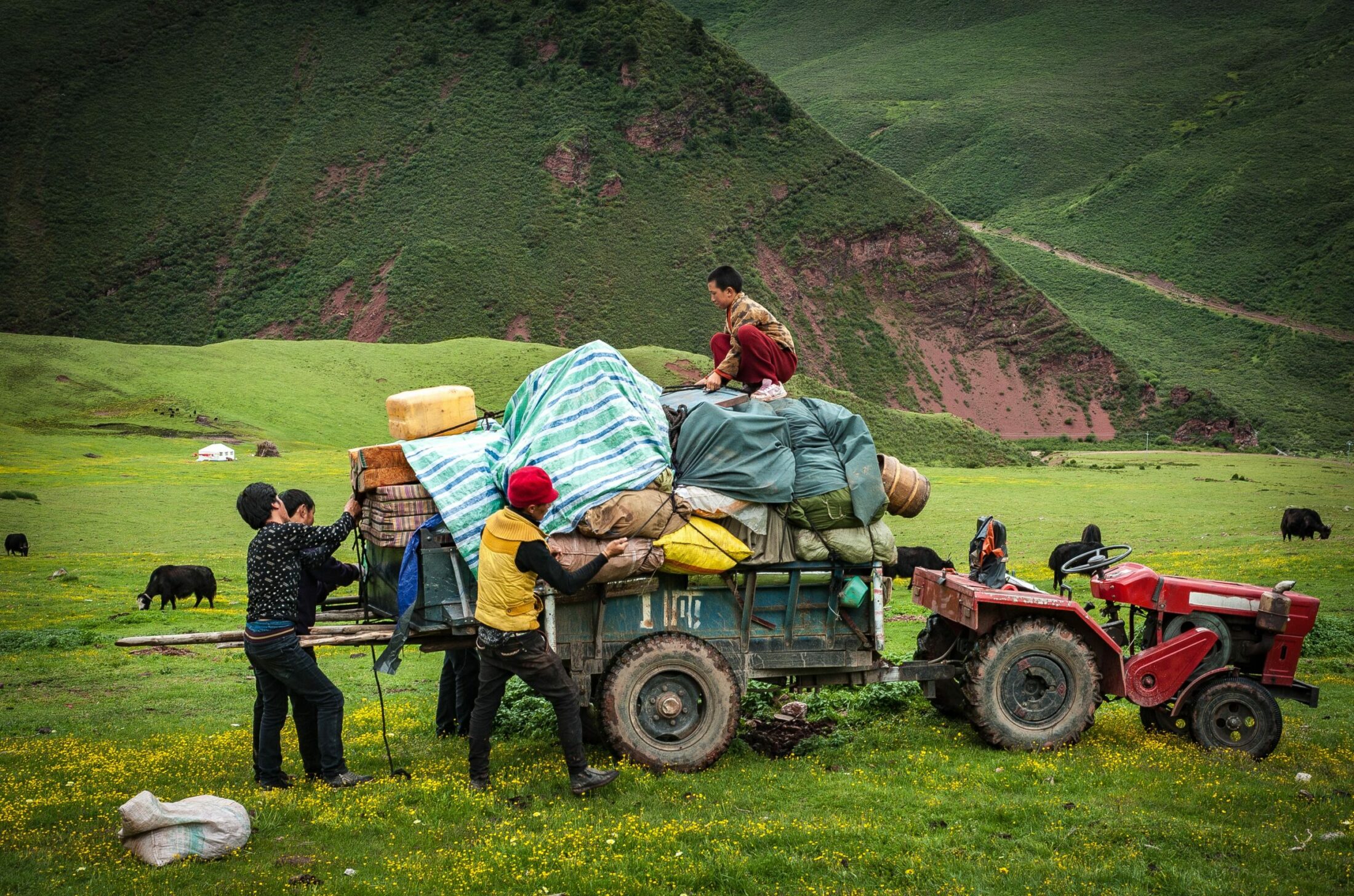 Traditionally, the Drokpa have moved their herds according to the weather, the quality of the pasture, and perhaps a divination by a lama. In this area, however, the local government now decides the dates on which the nomads move.

Here, a group from the Yulong Rongchen community arrives in Ramashong Valley. Jigme, the young man in the yellow waistcoat, has returned to nomadic life after briefly living in a resettlement village. He missed the freedom of the nomadic lifestyle and the close connection to the animals. This community is determined to maintain their nomadic lifestyle, believing settled life has nothing to offer. 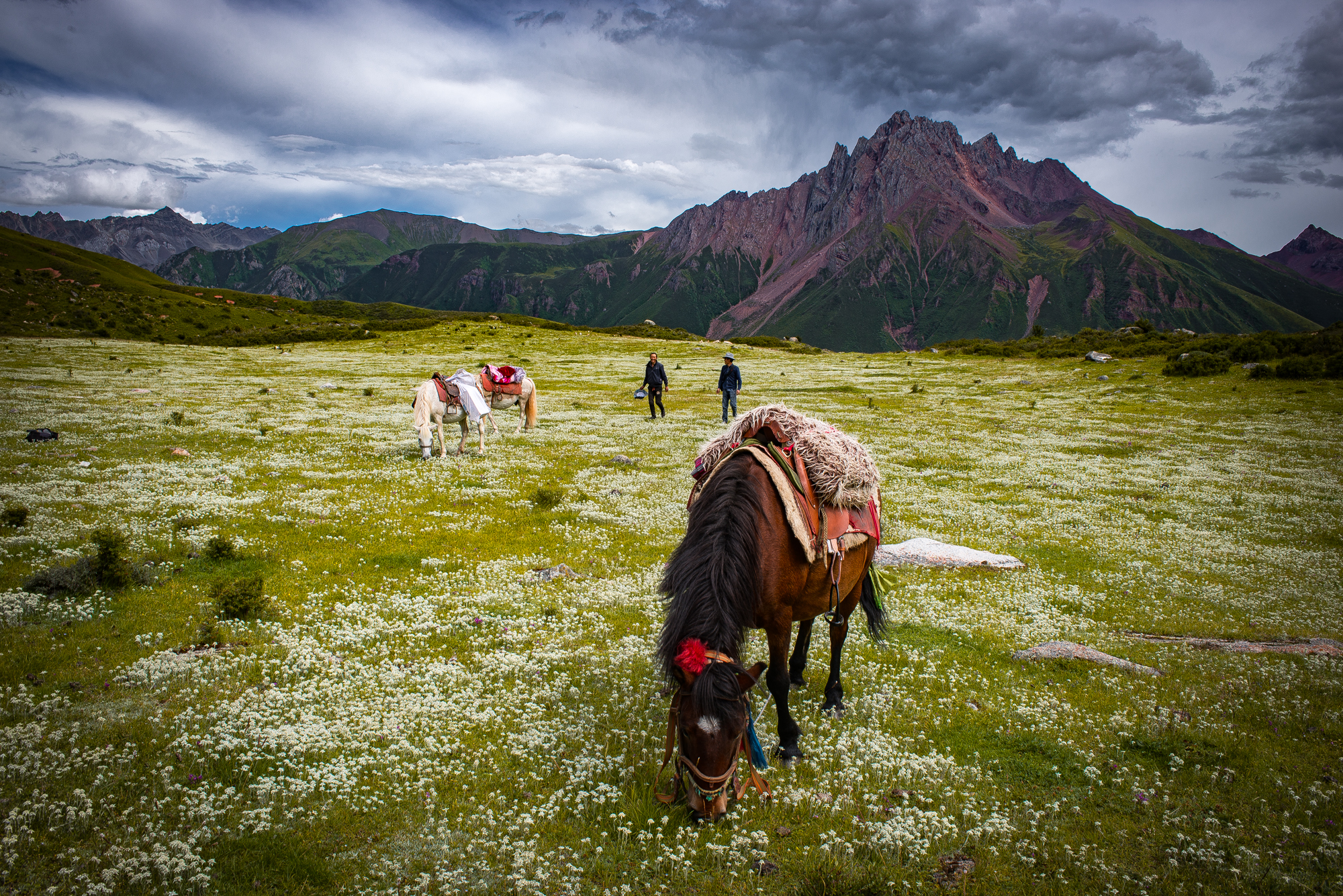 Sonam Wangbo lives in the beautiful, unspoiled, and sacred Dahu Valley in the alpine region of Kham. Sonam’s spring, summer, and autumn pastures can be reached only on horseback. He and a friend rest in a pasture blanketed with edelweiss on the way to Sonam’s summer camp in the Dahu Valley. In this region of Tibet, dried edelweiss flowers were traditionally kept in a pouch worn on a belt and used as tinder for starting fires. 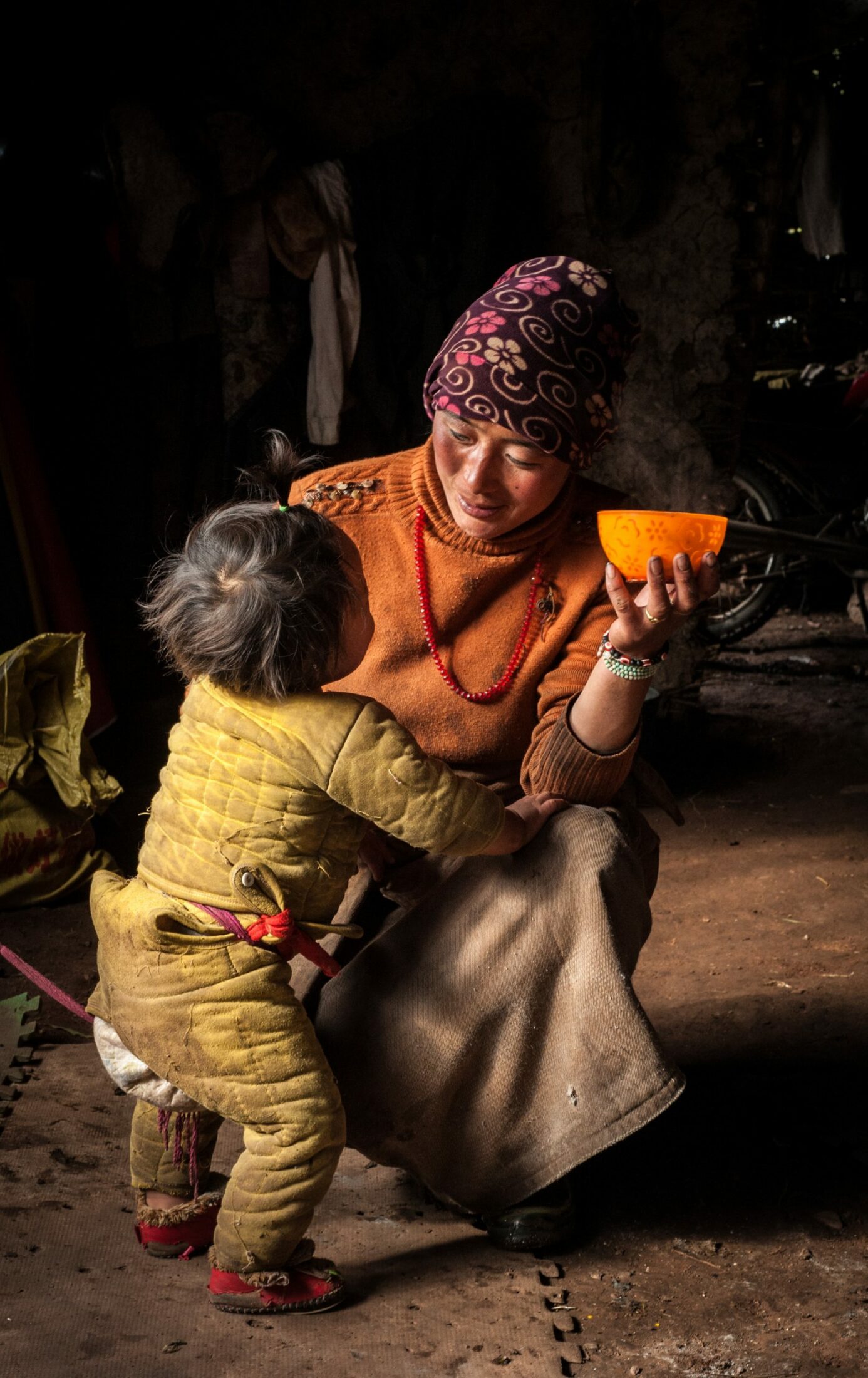 Sonam’s wife with their youngest child in the simple mud and wood hut that doubles as the family’s spring and autumn quarters. She has delivered all of her children at home, and all have survived. Rural Tibet has a high maternal and infant mortality rate, and there is no tradition of birth attendants. 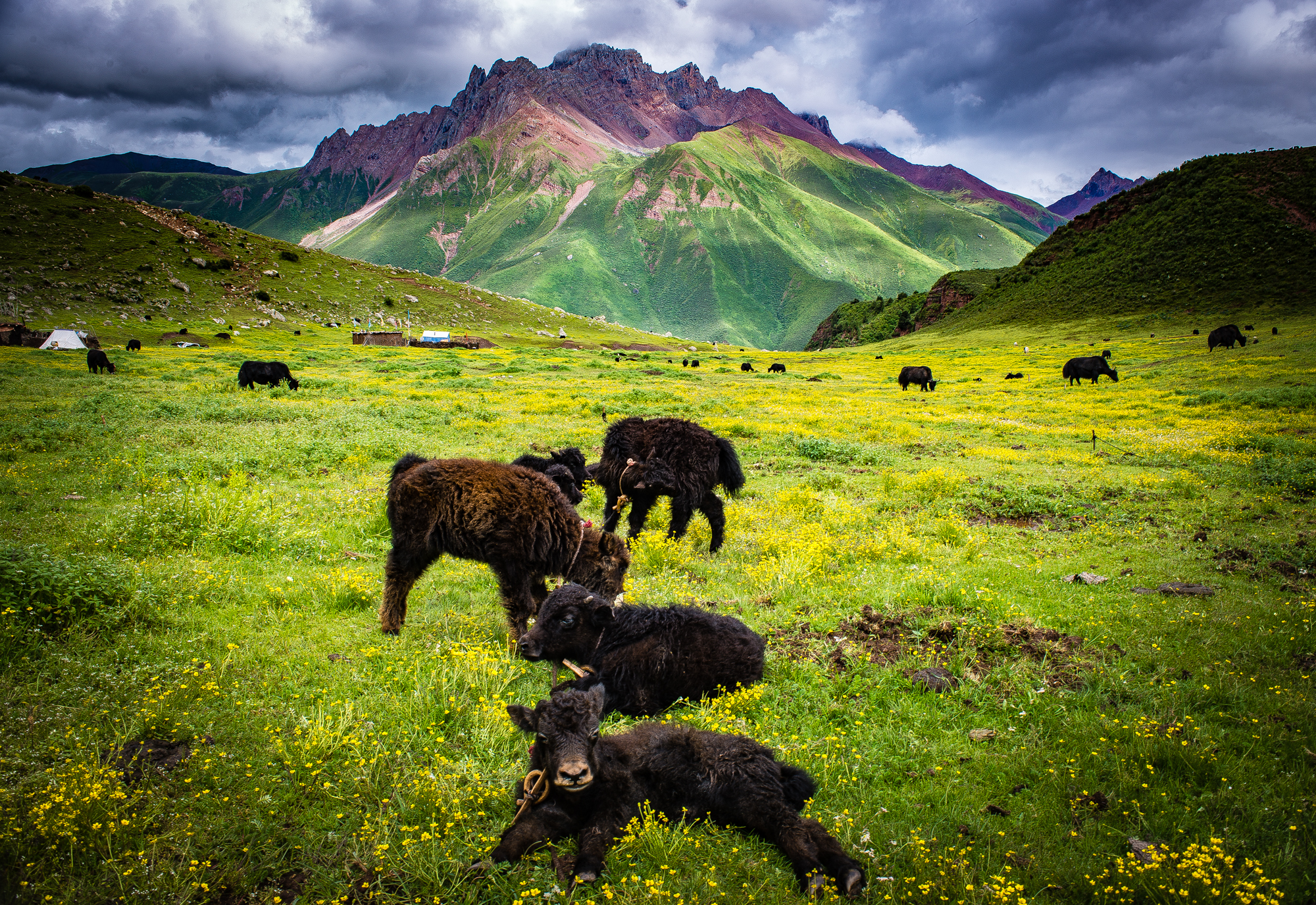 Baby yak are tied up in the spring pasture. Yak are known as nor or “jewel,” an indication of how precious they are to the nomadic economy. They provide milk, butter, cheese, yogurt, and meat, as well as wool for the tents, felt for clothing, and dung for the stoves. 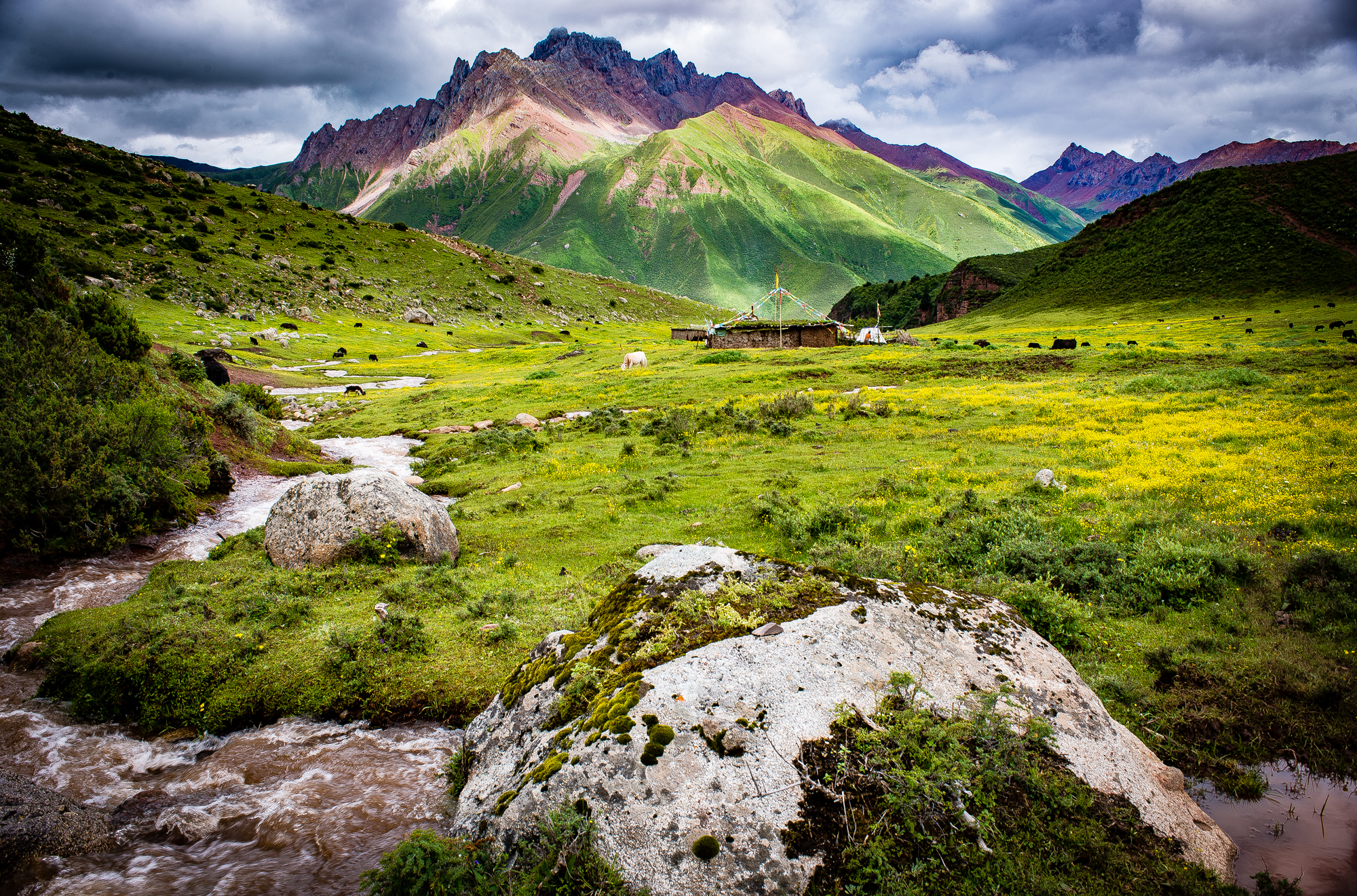 Green pastures surround the Wangbo family’s spring and autumn home in the Dahu Valley. Local people consider the entire valley to be sacred. Sonam moves his yak from pasture to pasture four times a year. The impact on the land is so light that the yak can return to their spring grazing pastures in the autumn to no ill effect. 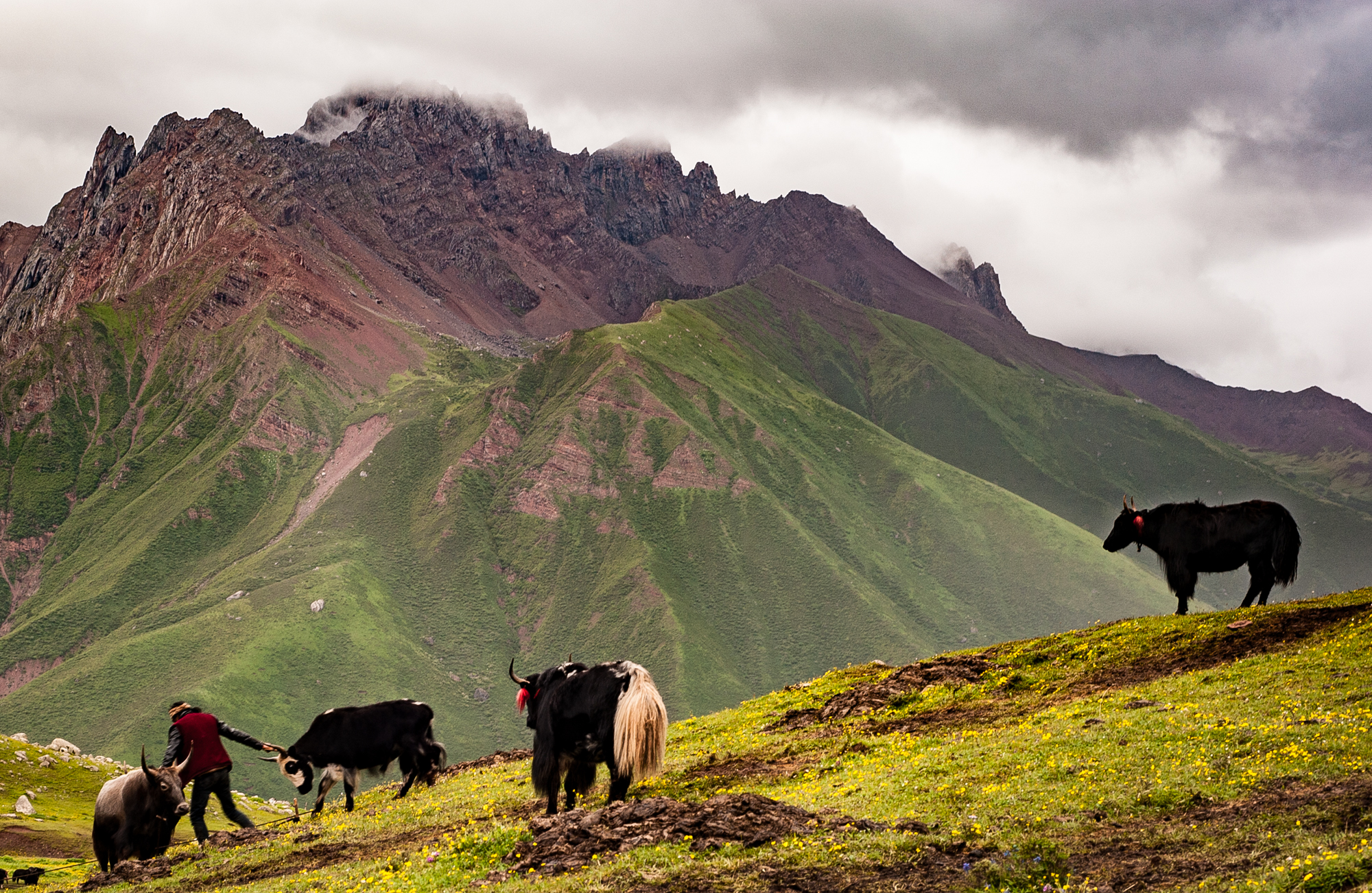 Even though Sonam does not face local government pressure to resettle, he has considered it due to poverty. Here, Sonam brings a dri, a female yak, down the mountain for milking. The red threads in her ears indicate that she has been “ransomed”: certain animals receive tsethar, or “life release,” meaning they will never be killed. Tsethar is offered as a compassionate gift, the merits of which are believed to cure illness. 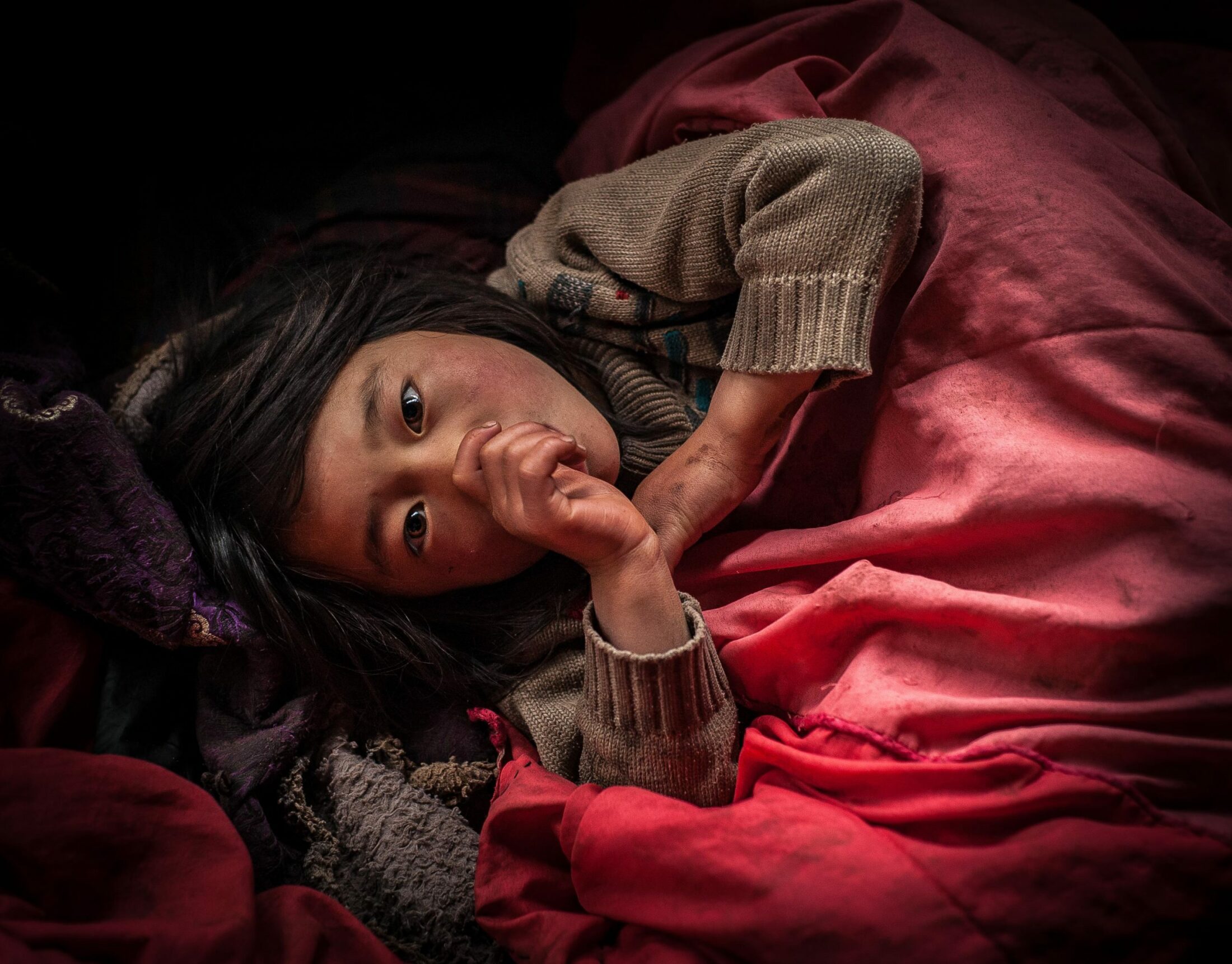 Sonam Wangbo’s sleepy daughter. Sonam supports a family of eleven people, including his wife, seven children, a mother, and an uncle. 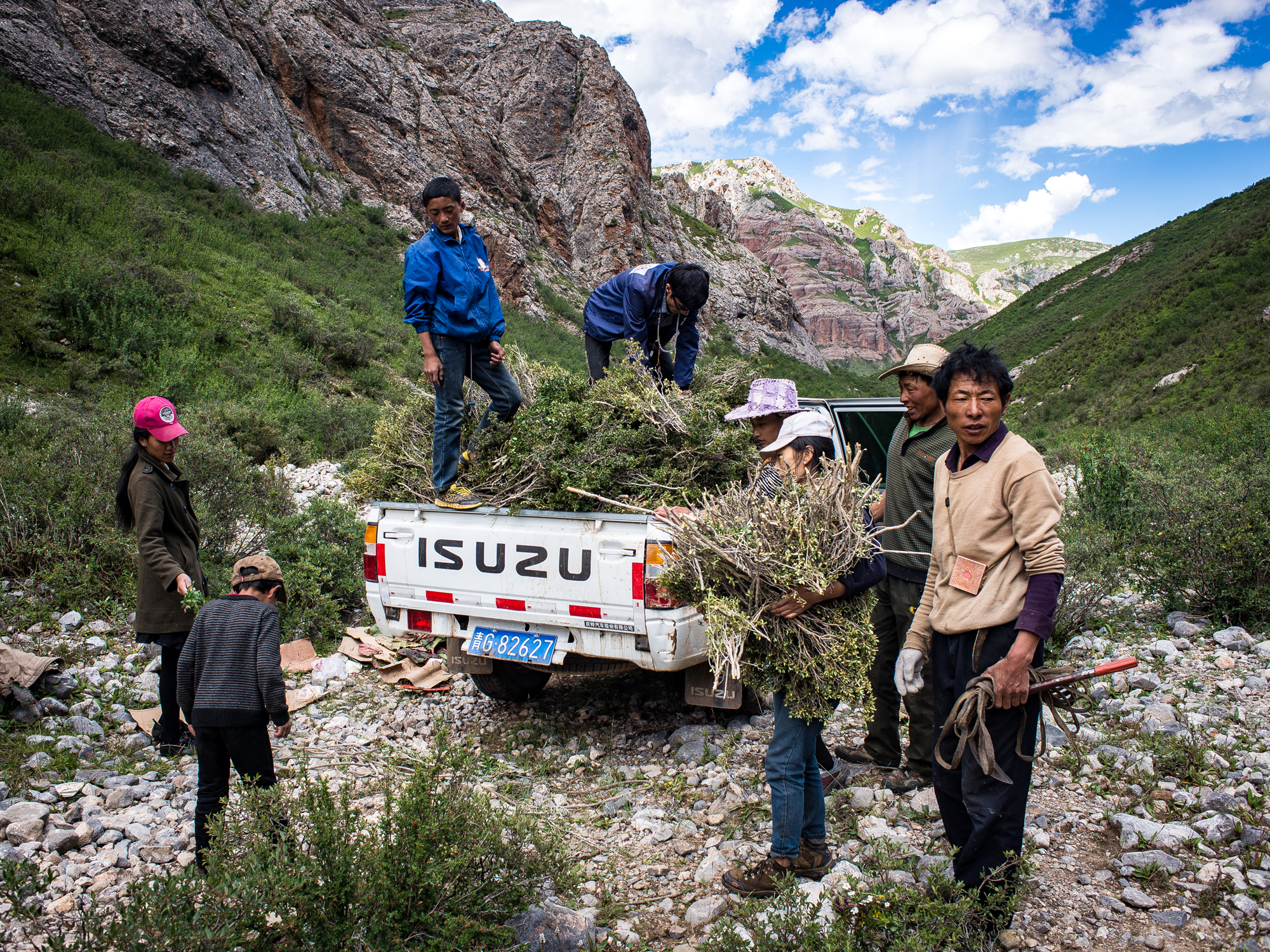 The Dong Tsang clan can trace their lineage back to Ling Gesar, Tibet’s legendary warrior hero. The camp consists of Rabten and his wife, Dempso, their brother-in-law, Digpo, and the younger children of the family. Here, Digpo, Rabten, and some of the children collect juniper and rhododendron. Rabten’s brother, Wandrak Rinpoche, requested the plants on behalf of his retreat center, where the monks and nuns will use the plants to make incense, which will then be sold. 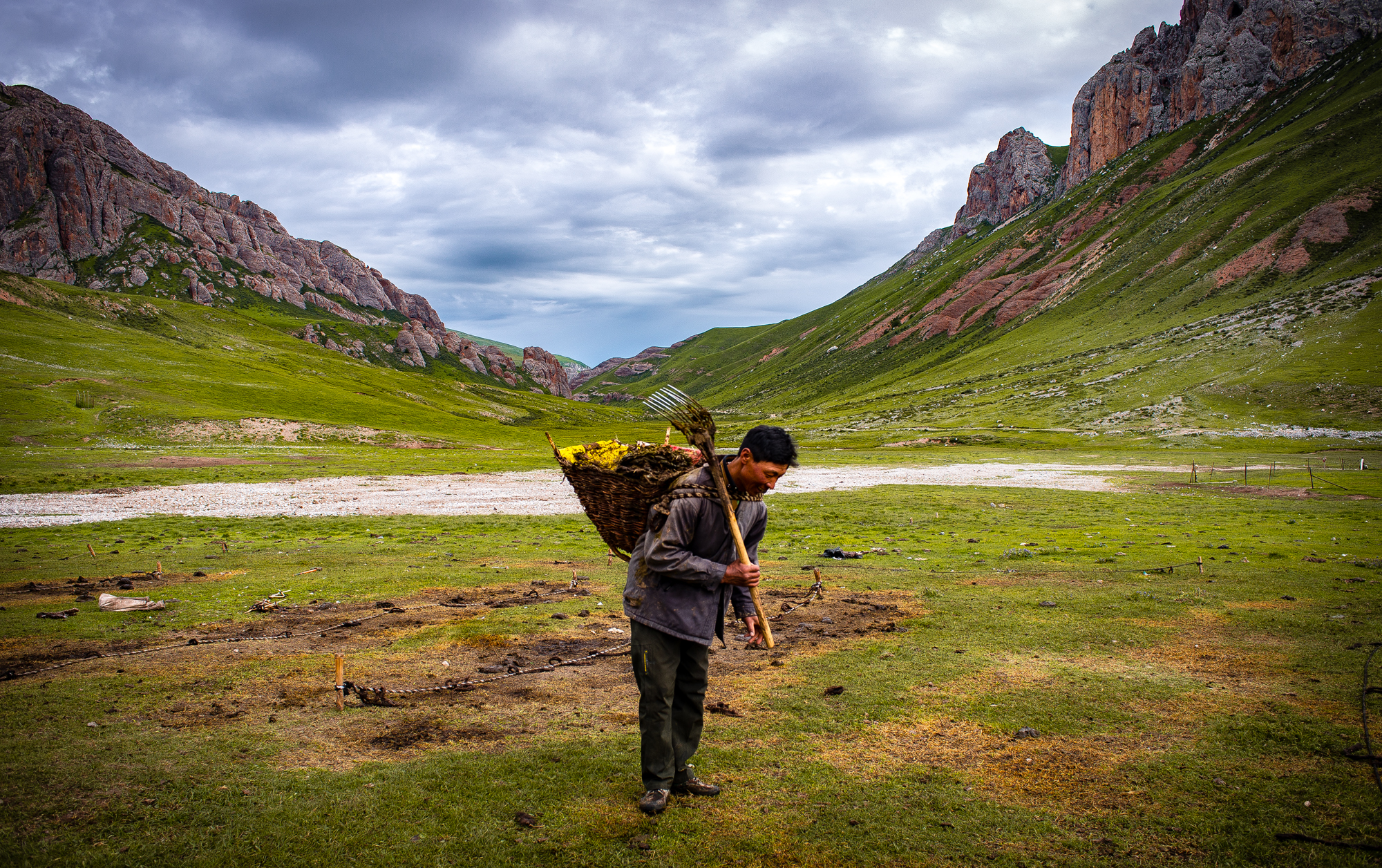 Digpo collects yak dung, which he will then spread out on the grass to dry so that it can be used as fuel for stoves. This is traditionally a woman’s task; however, Digpo’s wife, Yangzom, lives with their older children in the county town so that they can go to school. The younger children left at the camp are too young to take on milking and other necessary tasks. 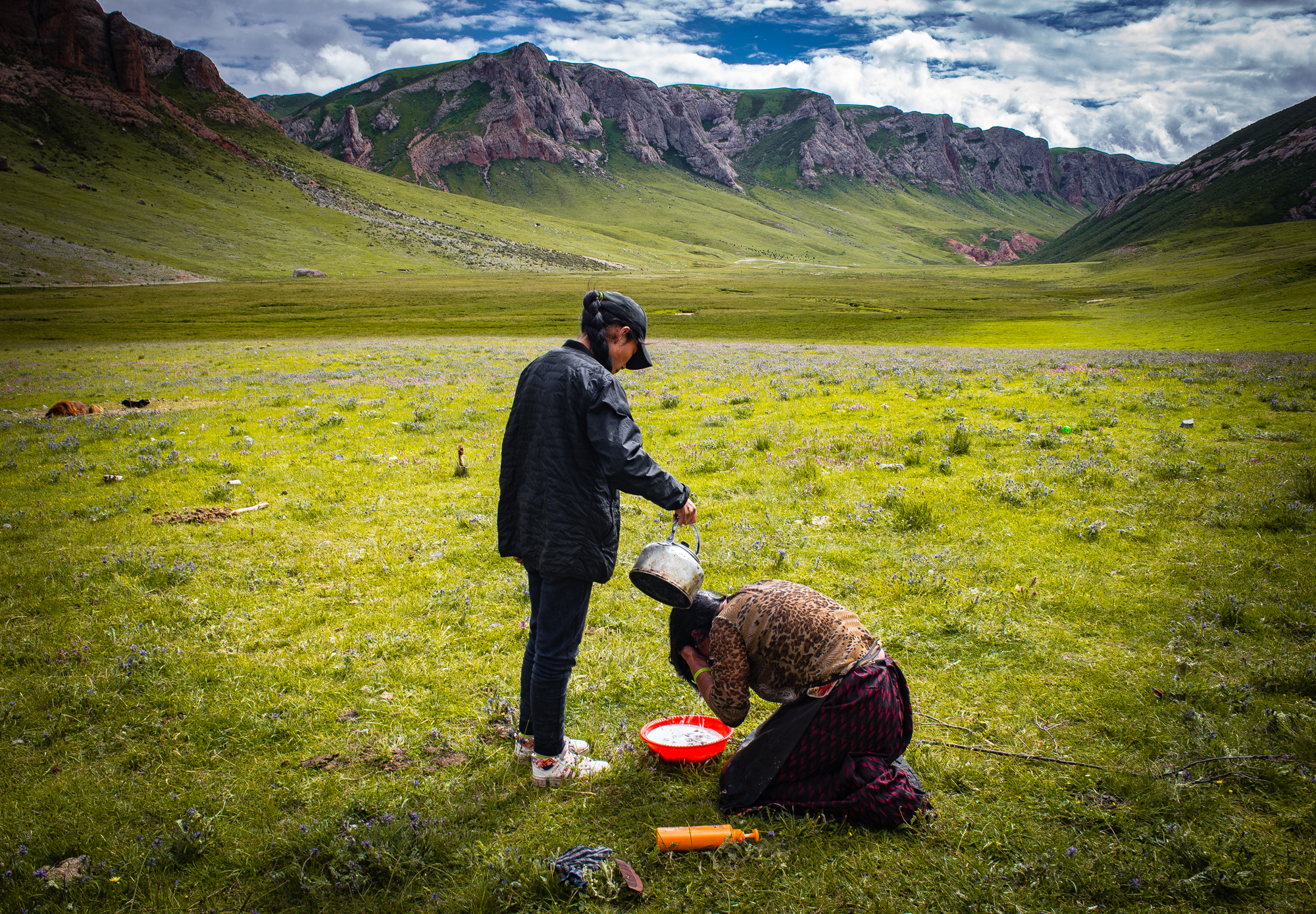 Dempso washes her hair with the help of her daughter. 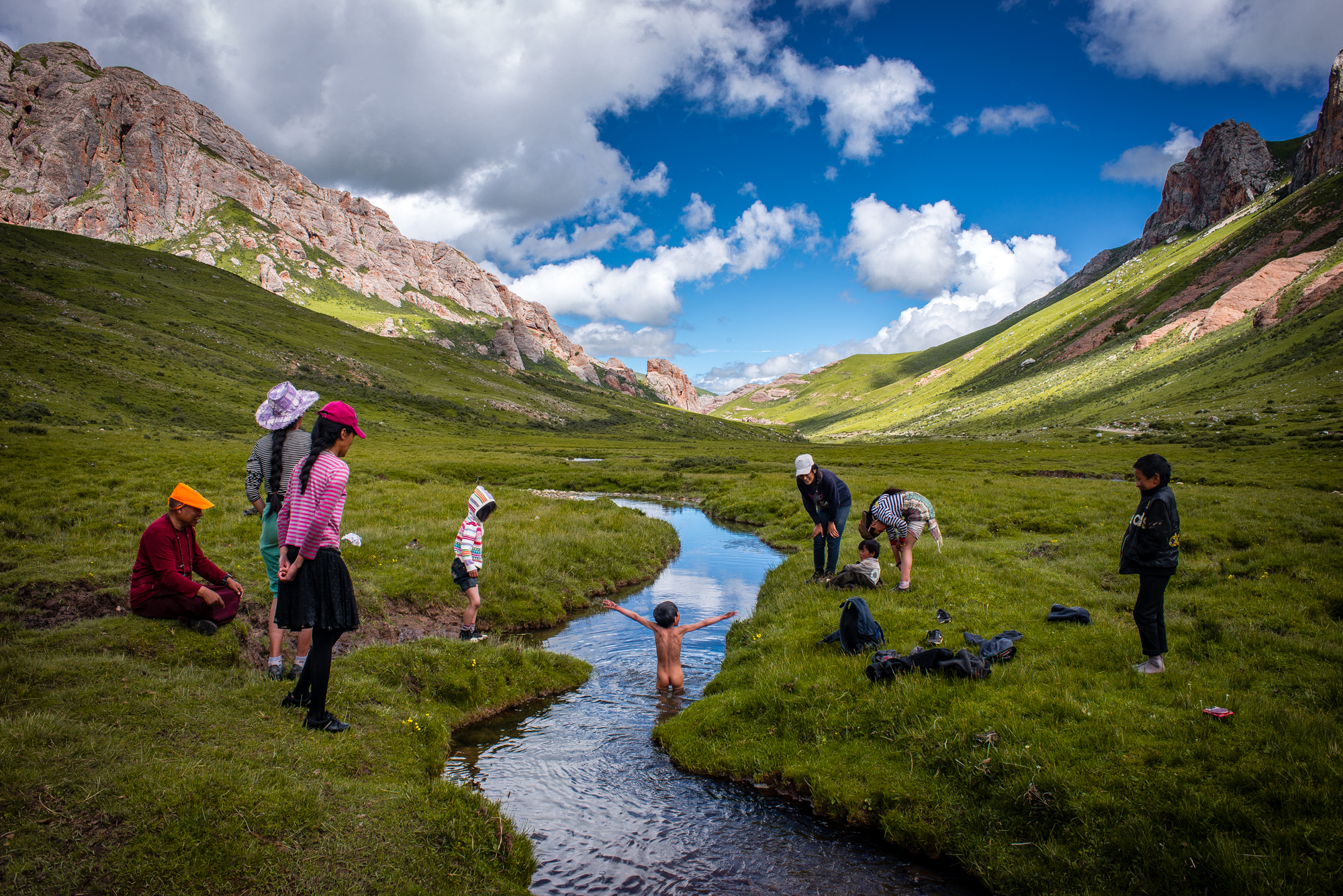 Summer holidays have begun at the seasonal camp. Young members of the Dong Tsang clan play in a nearby stream, the camp’s water source. Most of these children live with Rabten’s sister, Yangzom, in the county town in order to go to school, hence their urban style of dress. Two of the oldest children are at university and are unlikely to return to nomadic life. 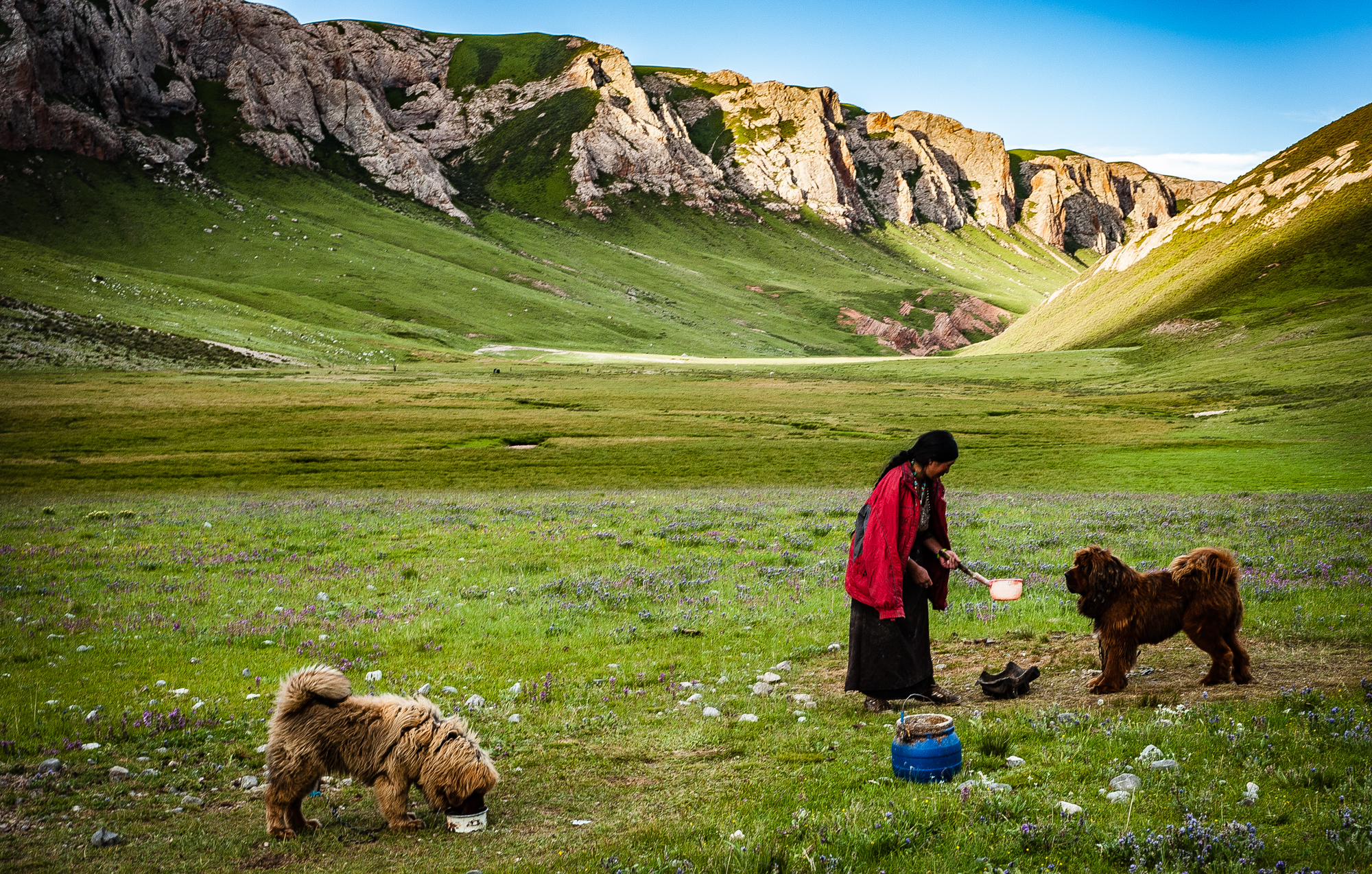 Dempso feeds the mastiffs. Traditionally, mastiffs have guarded nomad camps from snow leopards, bandits, and wolves. Wolf populations are increasing across eastern Tibet, perhaps because 80 percent of nomads in this region have settled, resulting in fewer mastiffs out on the land. Others theorize that as the local government confiscates guns, wolves have free reign to prey on sheep, goats, and baby yak. 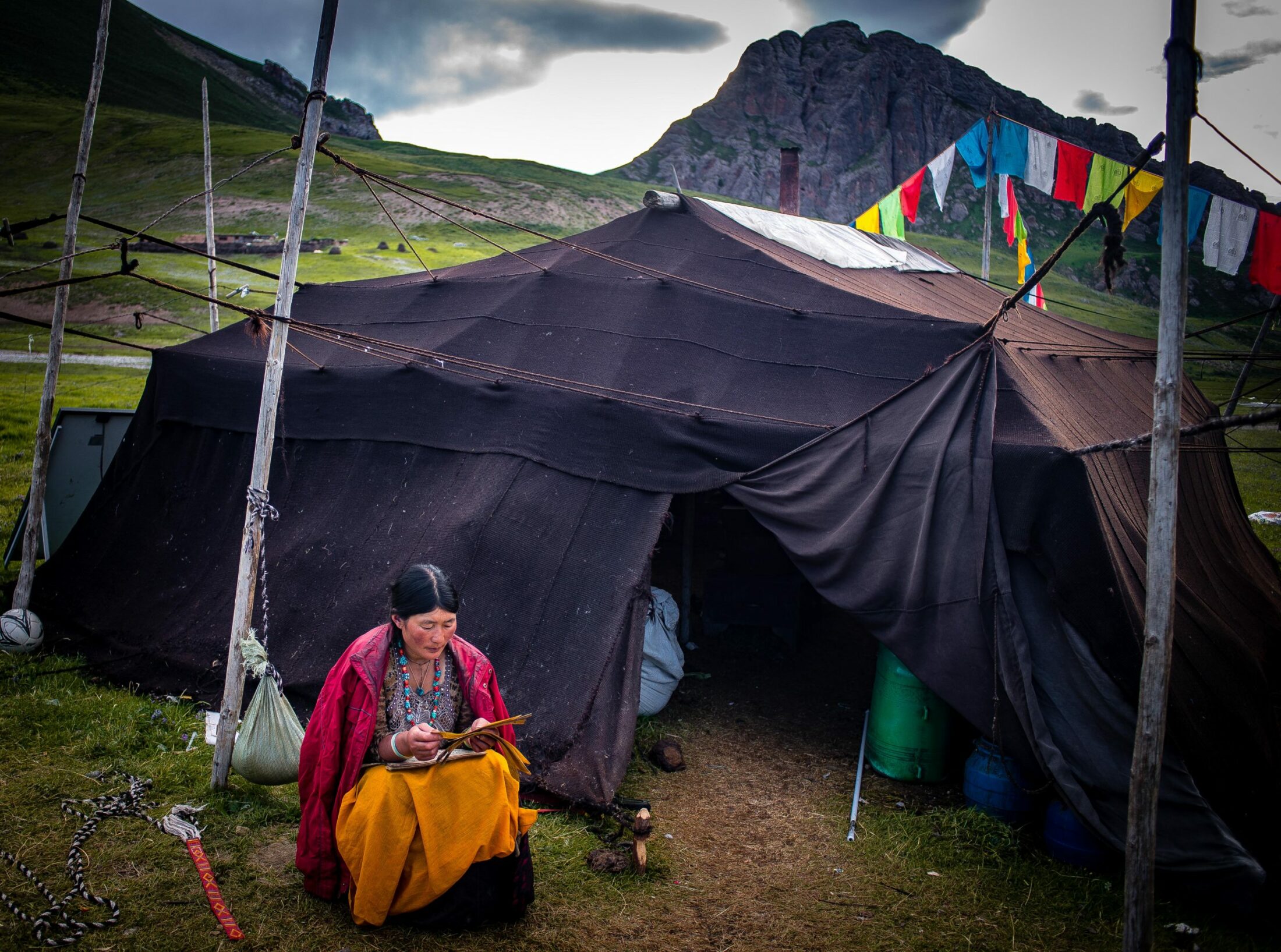 Sitting outside a black yak-wool tent, Dempso finds a quiet moment to say her daily prayers. The local government in the Nangchen area is encouraging the nomads to retain the traditional black tents, paying a small stipend to those who still use them. 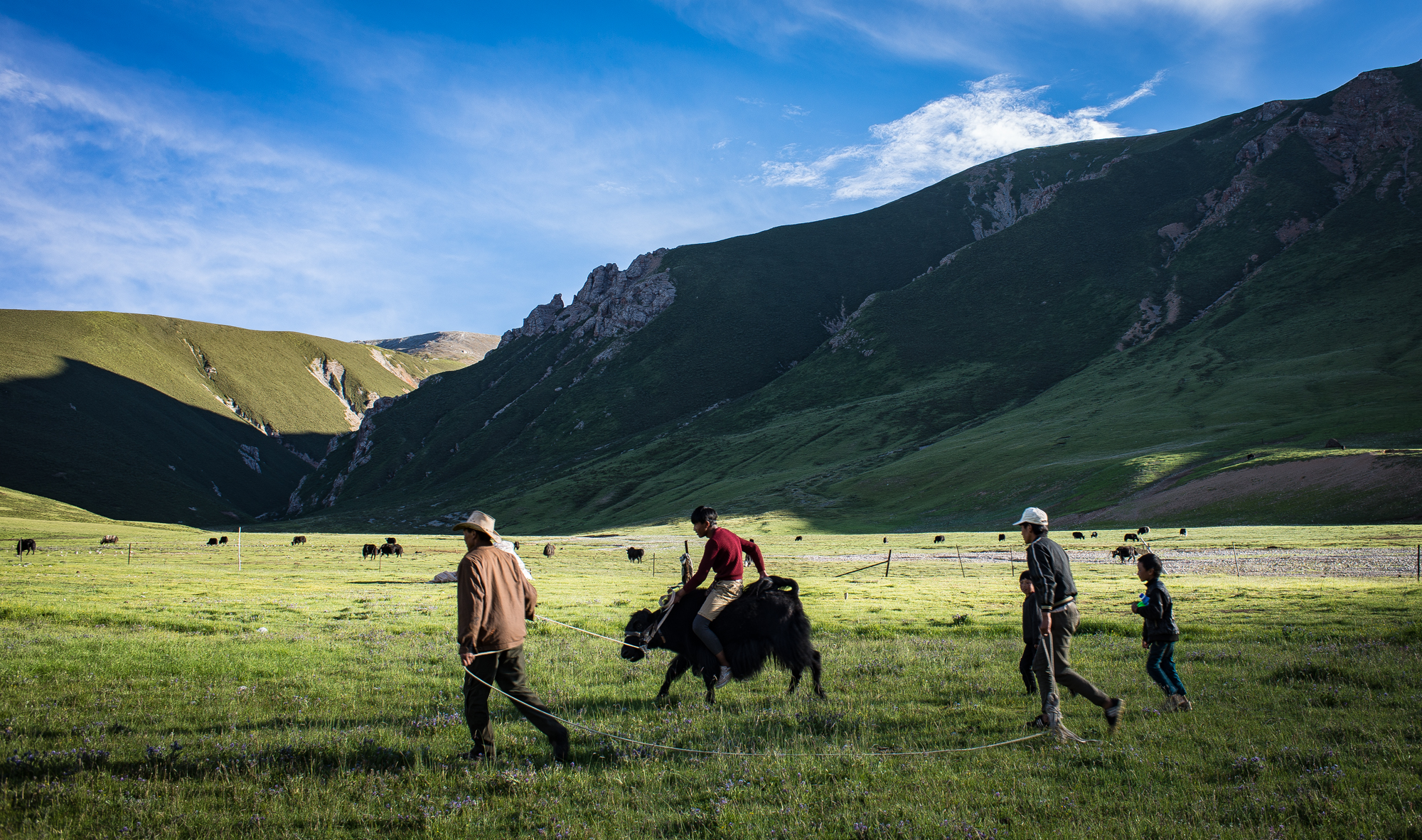 Digpo and his son train for the yak races at an upcoming festival in the county town. The clan’s traditional grazing lands are a few miles away. The family was allocated their current land in the 1980s, when collectivization was abandoned after the Cultural Revolution. 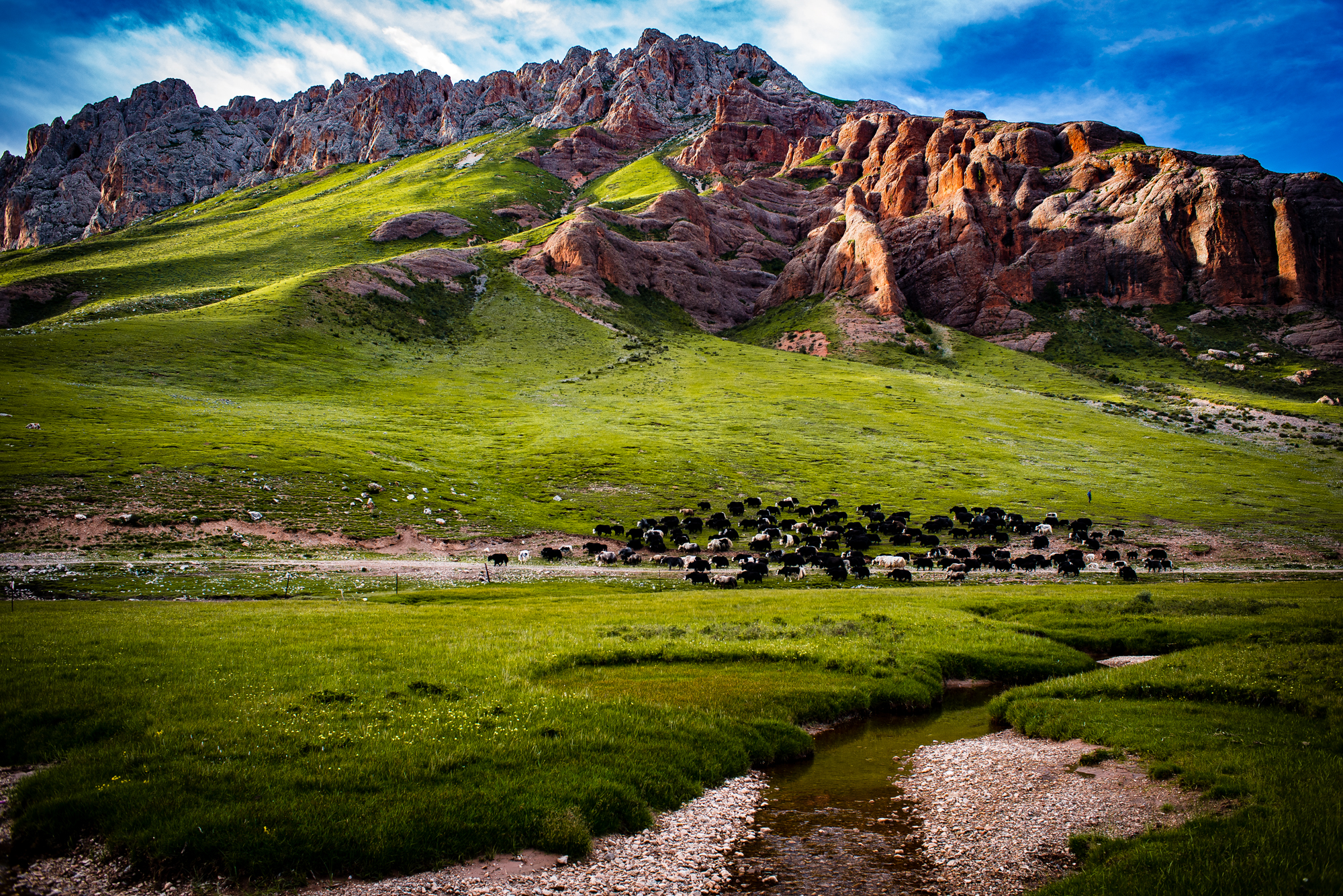 Yak return to the camp in the evening to be milked. All the mountains in the area have stories associated with them. The mountain pictured here is said to be the mountain of a wealth god. Some nomads have encountered sabdag, or nature spirits, in this valley. There is now so much available pasture around the camp that the family does not need to move seasonally at all: they just send the herd out in different directions each morning. 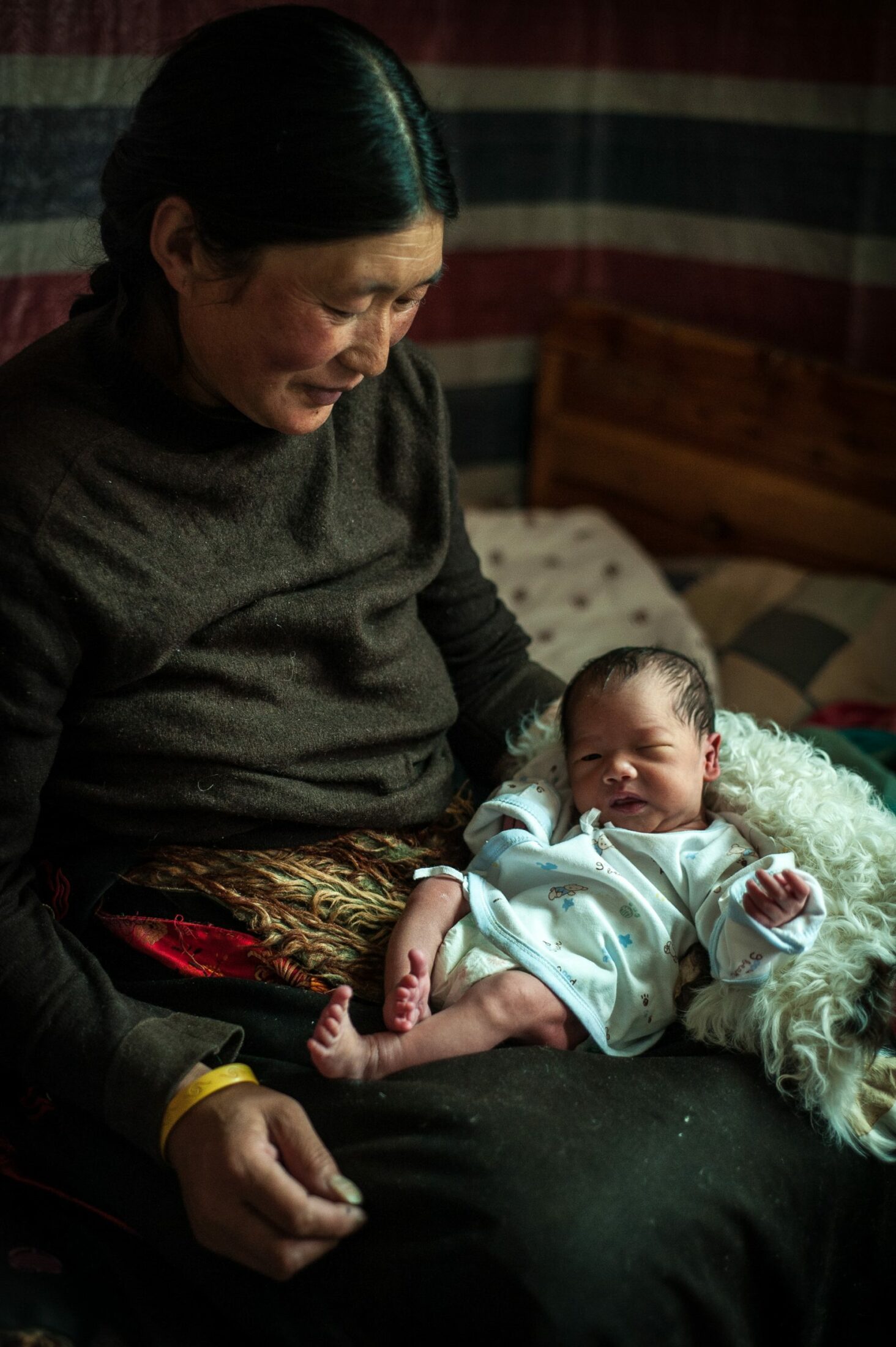 Dempso with her newly born daughter at her sister-in-law’s house in Shonda, the county town of Nangchen. Today, nomad mothers are encouraged to give birth in hospitals. Dempso came to Shonda to have her youngest child. 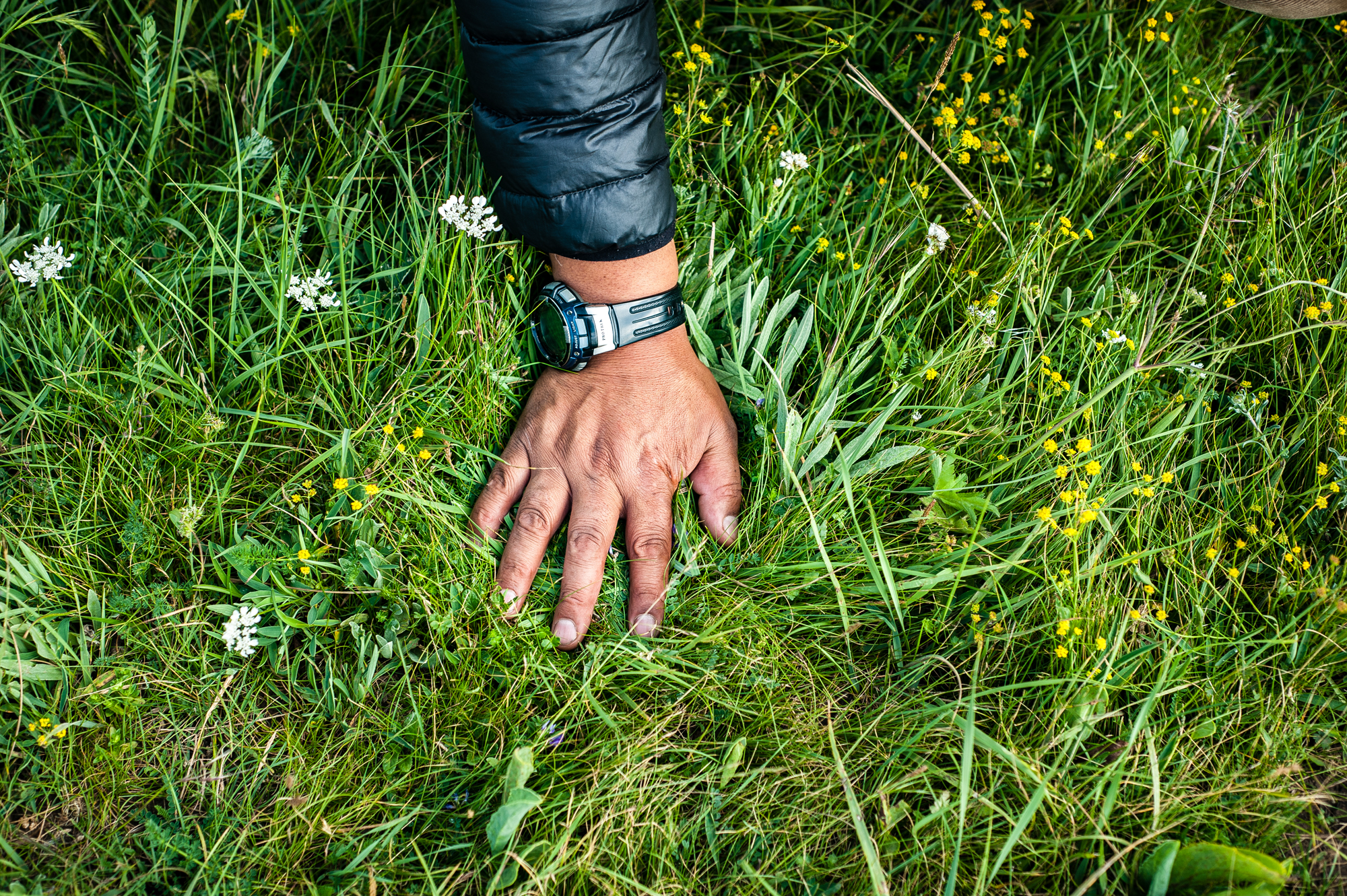 “Tradition says that when you place your hand on the pasture, you can count twelve to twenty different varieties of grass and flowers. This means the grassland is very healthy. Very, very few varieties means that the pasture is not so good.” —Palzang

The ecosystem in this area has suffered from a combination of disastrous government policies, wetland draining, local mining, and global warming. 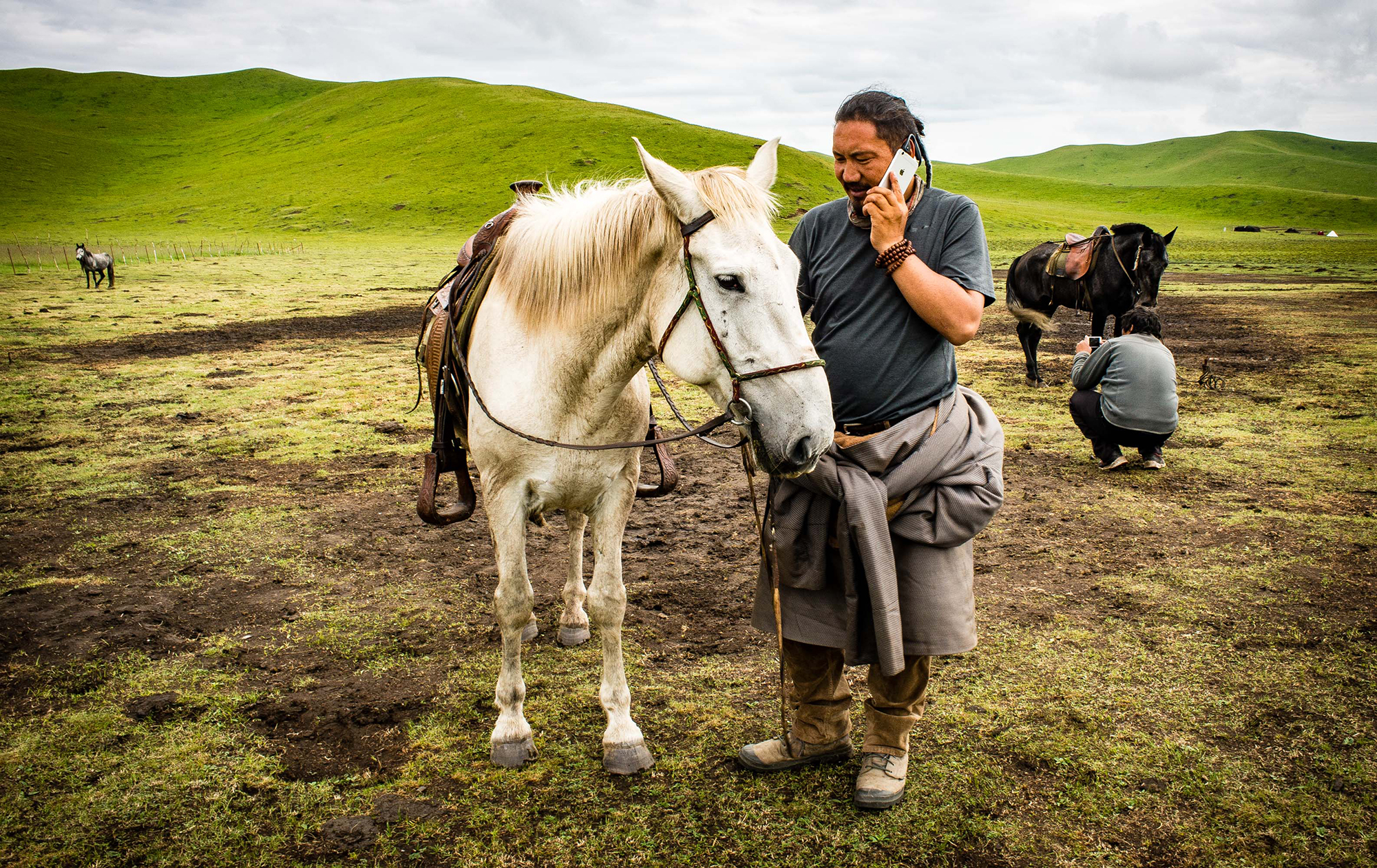 Palzang left nomadic life to attend the university in Lhasa but has returned to help his people tackle the desertification of the grasslands. Palzang is pictured here with his beloved horse, answering his smartphone. With the increase in phone masts across Tibetan areas, most nomads now carry mobile phones. 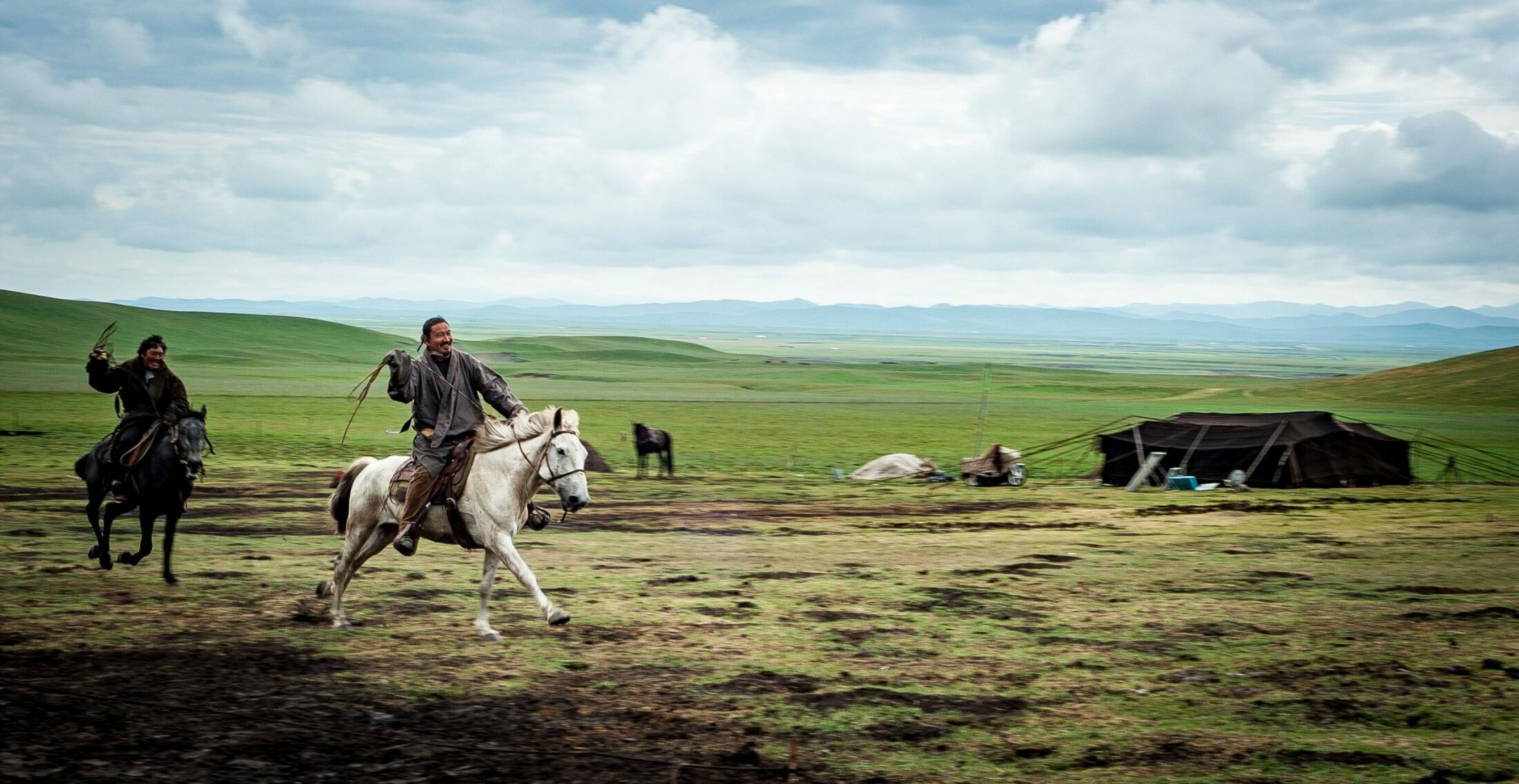 Palzang and his brother with their horses. With the help of eight hundred local volunteers of all ages, and the particular wisdom of Drokpa women, Palzang has re-greened 1,650 acres of sand dunes using a combination of local naga—water spirit—pujas, yak dung, and local seeds that are trampled into the ground by yaks. 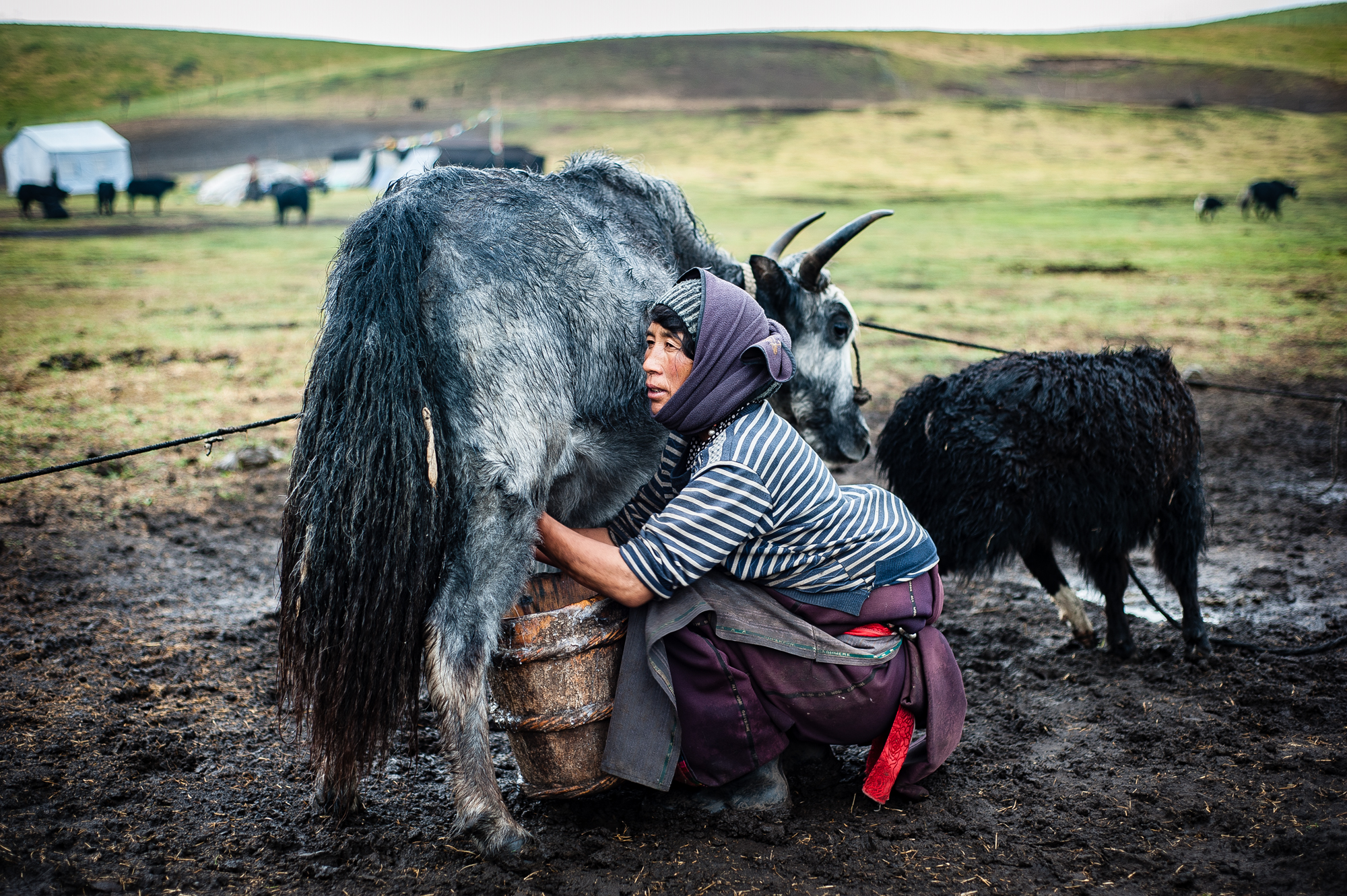 Palzang’s sister-in-law milks a dri. Nomadic life is very hard for the women, especially in the summer, when they start milking as early as four o’clock in the morning. In the evening, milking often finishes after dark. 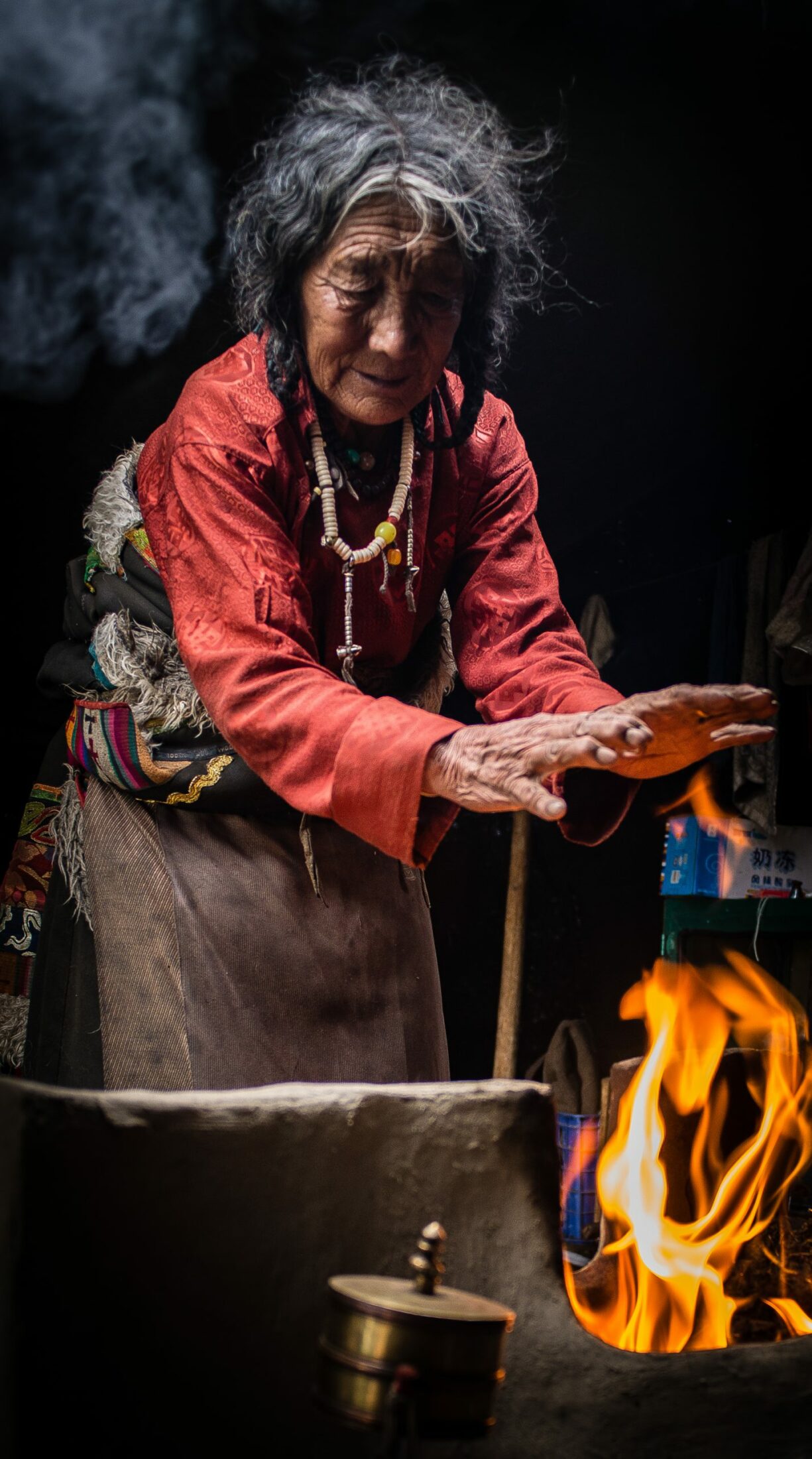 Palzang’s mother warms herself at the stove in her black tent, wearing her much-used mala—or prayer beads—over her traditional Amdo dress. In the foreground is her prayer wheel. The Drokpa are known for their devotion to spiritual life and their support of local monasteries.

A rukor, or traditional circle of black yak-wool tents, is set up in the summer pastures near Damda, in the Kham region.

“The nomads are the ones who for many, many centuries have preserved the grasslands.” —Gebchak Wangdrak Rinpoche

The twenty-first century meets nomadic life near Dzorge, in the Amdo region. In certain areas, grasslands have been fenced, causing degradation of the land, family disputes, and conflicts around moving herds to water or fresh pastures. 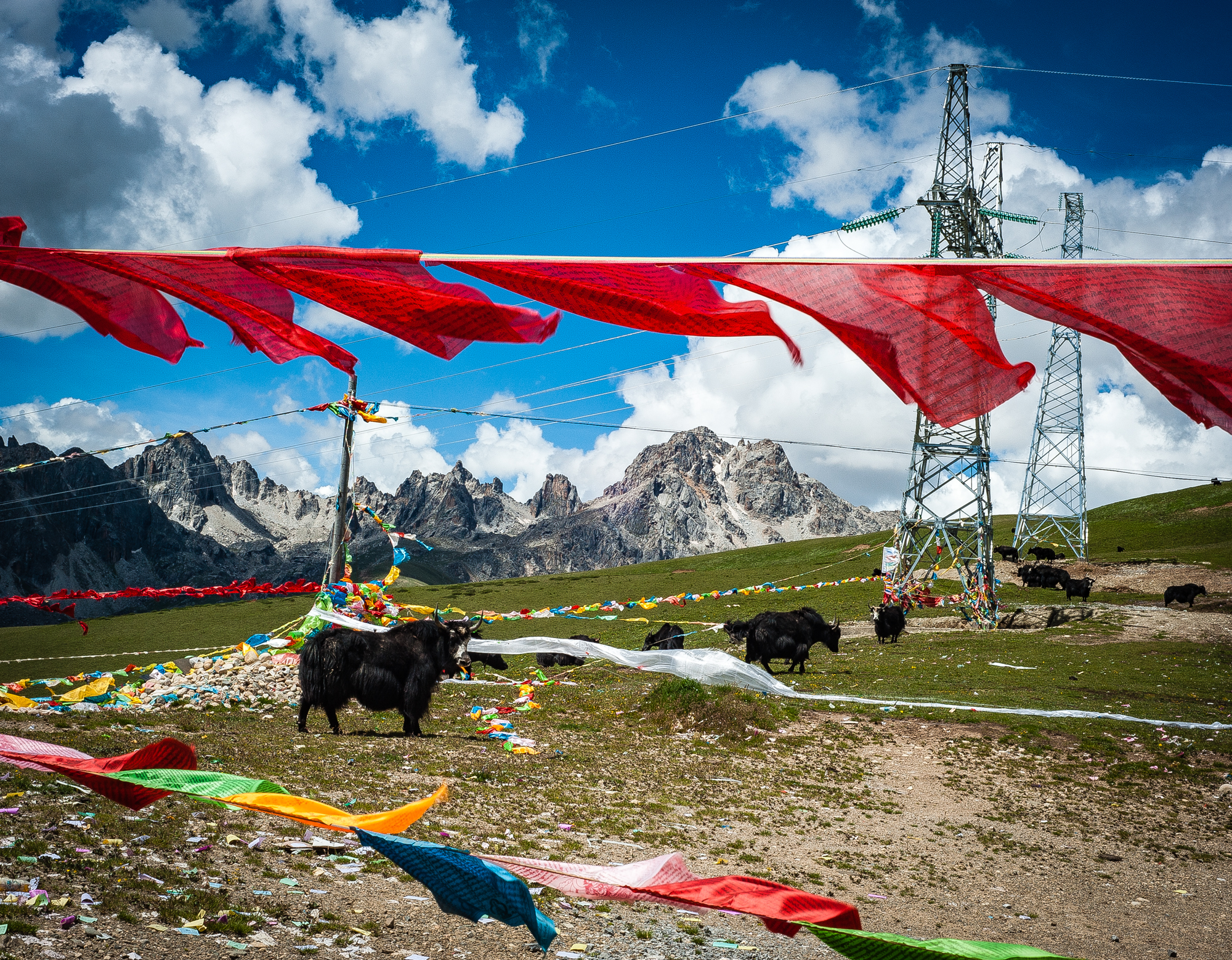 Yak, prayer flags, and pylons on a mountain pass near Dzogchen, in the Kham region. Pylons are an increasingly common sight—a sign of Chinese development in the region.

A resettlement village on the outskirts of Damda, Kham. Many such villages have appeared across the eastern Tibetan Plateau in the last twenty years. Some are populated by unemployed pastoralists facing an uncertain future. Others are simply abandoned. 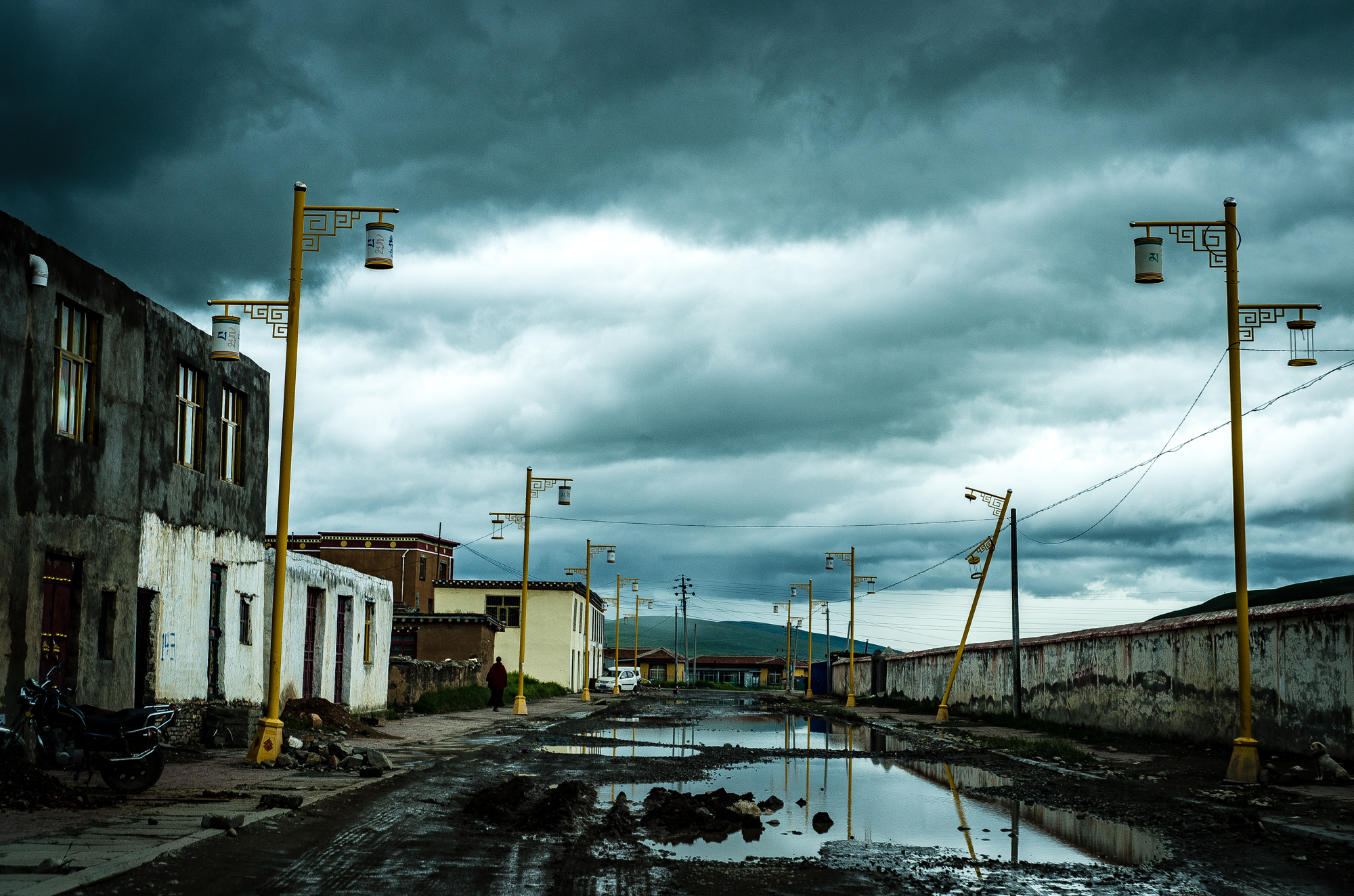 The outskirts of Sershul, Kham. Many nomads are “resettling” on the edge of ever-expanding Tibetan towns in order to be closer to monasteries and educational opportunities for their children. 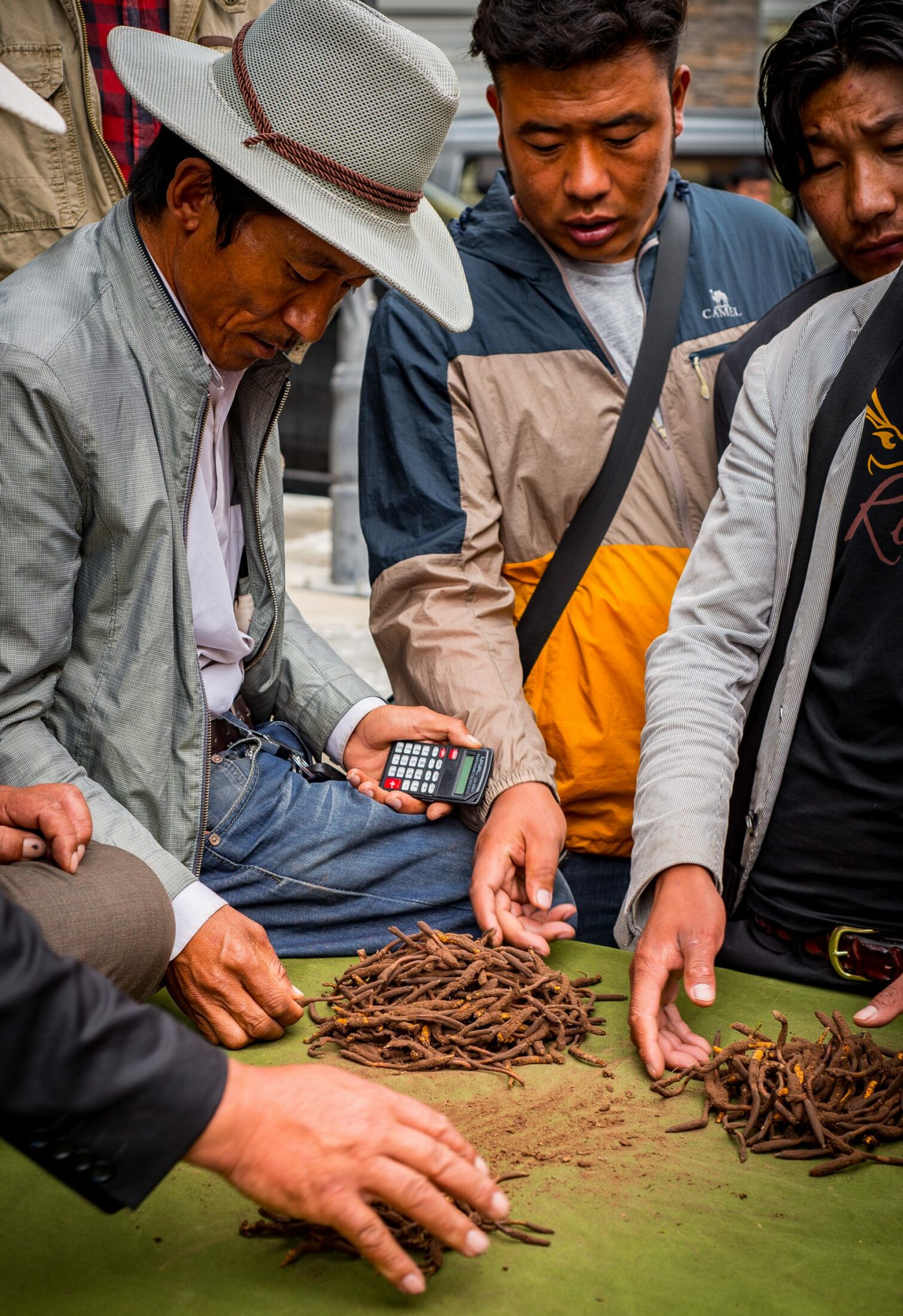 Trading in Cordyceps in Jyekundo. Cordyceps—yartsa gunbu, or “caterpillar fungus,” in Tibetan—grows best above four thousand meters and is only found in the Himalayan region. In 2008, it was the most expensive herbal supplement in the world. Many nomads gave up nomadic life to focus on the trade but lost out when the bubble burst. 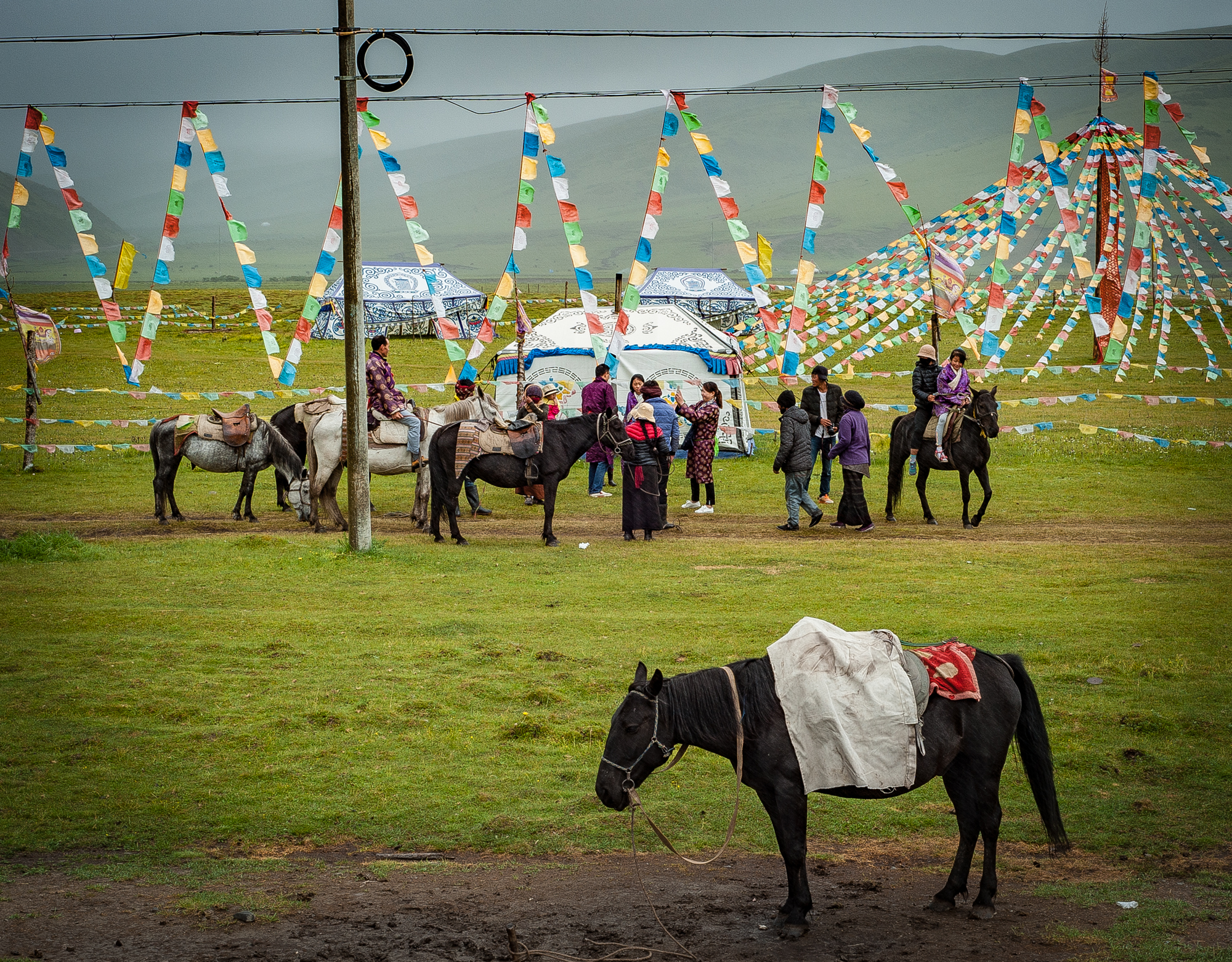 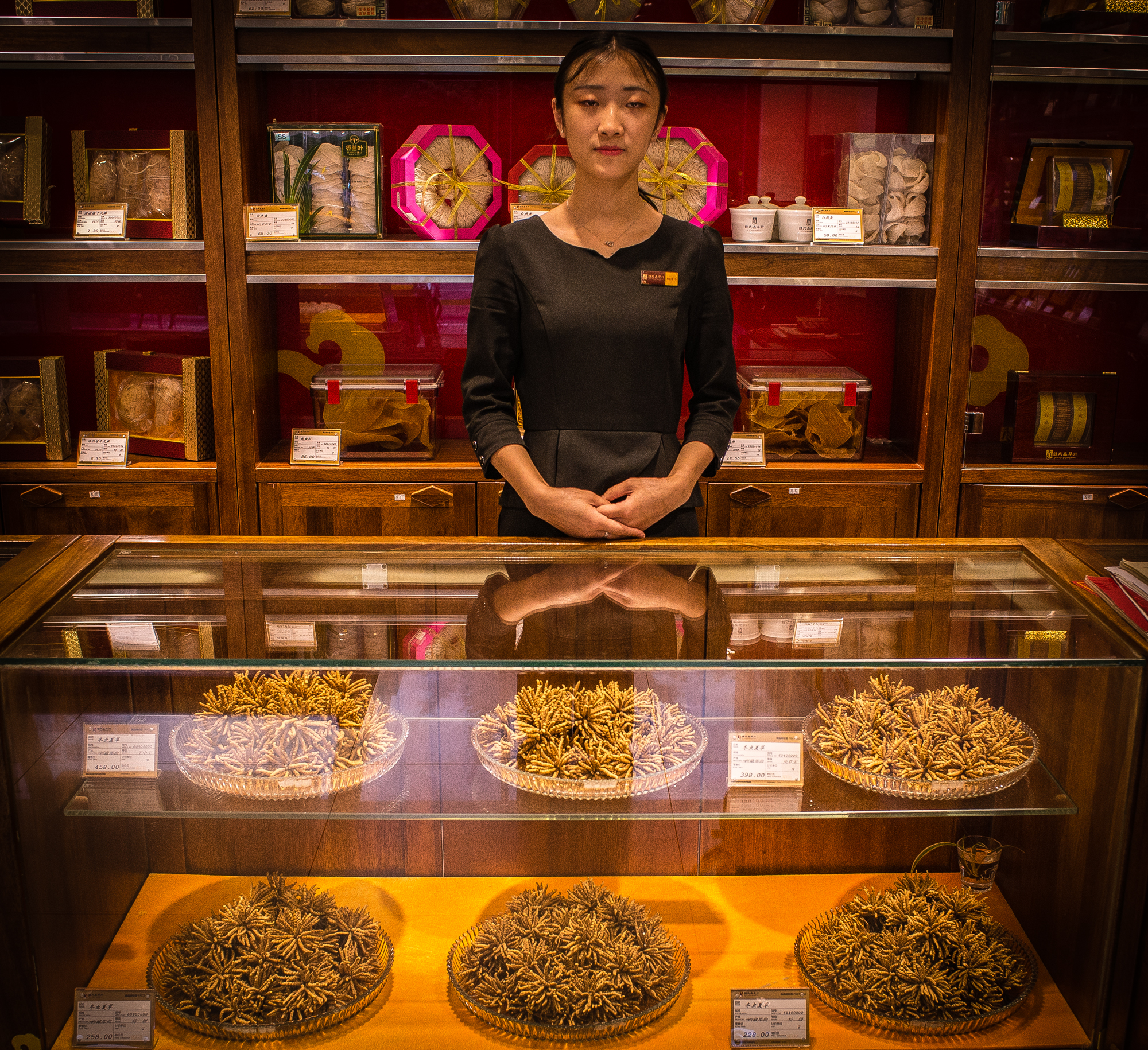 Cordyceps are graded and arranged for sale in a specialist shop in Chengdu.

Tibet’s Drokpa, or nomads, have been herding livestock on the vast high-altitude pastures of the Tibetan Plateau for millennia. The Drokpa, meaning “people of the solitudes,” are truly a mountain people.

Traditionally, Tibetan nomads were very free. They formed tribal communities to support each other in their harsh environment and protect each other from threats of weather, disease, and bandits. Strongly influenced by the centuries-old teachings of Bon shamanism and Buddhism, Tibetan nomads understand the earth to be sacred; they bring reverence, care, and respect to the land. With a holistic and self-sufficient lifestyle that is in harmony with nature and the seasons, the Drokpa are natural stewards of Tibet’s grasslands and living examples of original Tibetan culture.

Recently, a lack of appreciation for and understanding of the indigenous knowledge of the Drokpa has resulted in the rapid erosion of this ancient way of life. Resettlement policies have coaxed—or forced—many nomads into selling their herds and moving into concrete homes in towns and villages. Ill-advised agricultural policies, global warming, the boom-and-bust economy of Cordyceps fungus, conflicting advice from Tibetan lamas, and the pressures of twenty-first-century materialism have all contributed to a steep decline in the Drokpa population and an erasure of the Drokpa culture.

It is difficult to grasp, and impossible to measure, the extent of what would be lost were this way of life to disappear. This essay explores the lives of four Drokpa communities holding the thread of tradition in the midst of modernization and imposing development.