Kalyanee Mam is an award-winning filmmaker whose work is focused on art and advocacy. Born in Battambang, Cambodia, during the Khmer Rouge regime, Kalyanee immigrated to the United States in 1981 with her family. Her debut documentary feature, A River Changes Course, won the World Cinema Grand Jury Prize for Documentary at the 2013 Sundance Film Festival and the Golden Gate Award for Best Feature Documentary at the San Francisco International Film Festival. Her other works include documentary shorts Lost World, Fight for Areng Valley, Between Earth & Sky and Cries of Our Ancestors. She has also worked as a cinematographer and associate producer on the 2011 Oscar-winning documentary Inside Job. She is currently working on a new feature documentary, The Fire and the Bird’s Nest.

Adam Loften is a filmmaker and producer of documentary films, virtual reality experiences, and podcasts. His work has been nominated for Emmy and Peabody Awards and featured on PBS, National Geographic, The Atlantic, and The New York Times.

Emmanuel Vaughan-Lee is an Emmy and Peabody Award–nominated filmmaker and a Sufi teacher. His films include: Earthrise, Sanctuaries of Silence, The Atomic Tree, Counter Mapping, Marie’s Dictionary, and Elemental. His films have been screened at New York Film Festival, Tribeca Film Festival, SXSW, and Hot Docs, exhibited at the Smithsonian Museum, and featured on PBS POV, National Geographic, and New York Times Op-Docs. He is the founder and executive editor of Emergence Magazine.

As Singapore dredges sand out from beneath Cambodia’s mangrove forests, an ecosystem, a communal way of life, and one woman’s relationship to her beloved home are faced with the threat of erasure.

I remember my first trip to the mangrove forests near the island of Koh Sralau and along Cambodia’s coastline. I had no idea how extensive the mangrove forests were or how spectacular they would be. The forests stretched for miles and miles, carving out small islands, narrow waterways and channels, and ecologically diverse estuaries. I wanted to document the impact of sand dredging on the mangroves and on the lives of the people who live and thrive in these forests and the oceans surrounding them.

For over a decade, the government of Cambodia has granted several private companies concessions to mine these mangrove forests for sand. Each year, millions of metric tons of sand are shipped to Singapore to enlarge this island nation’s land mass, while Cambodia destroys its only natural protection against erosion, rising sea levels, tsunamis, and hurricanes and lays waste to a vital and fragile ecosystem that thousands of families depend on for their livelihood. 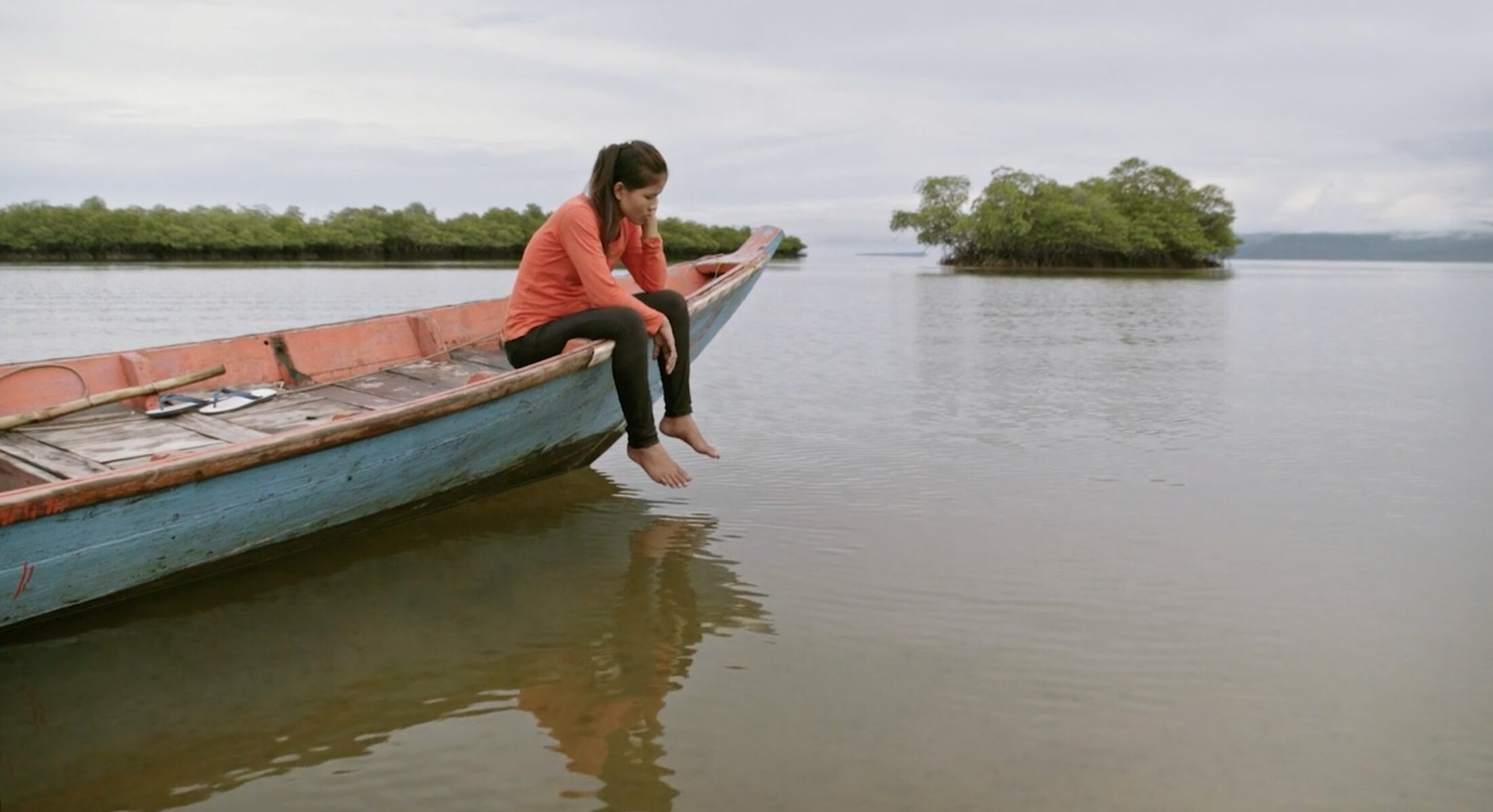 As I gazed in awe at the grandeur and beauty of these forests, I wondered if we still value nature as she should be valued. As they are, in their delicate but infinite majesty, these mangrove forests provide a home for fish; crab, clams, snails, and other crustaceans; and microscopic organisms we can’t even begin to account for. In the early morning, the egrets, geese, brilliantly befeathered kingfisher, and other wild birds come to feed along the forest edges. Monkeys leap across branches, and otters wade through the narrow waterways. At night silvery fish skip and fly above the glassy water, while fireflies glow in the forest like brilliant cobwebs of silk and gossamer. And in Koh Sralau, the mangrove forests provide a home for people who have for generations depended on this delicate ecosystem for their livelihood and way of life.

For the wildlife and people of Koh Sralau, the mangrove forests and the sand that root and ground these forests are jewels in and of themselves. They are valued for what they are and not for what they could be. The sand is a jewel because it adorns and gives life and sustenance to the mangroves and the creatures and the people who have made their home here. Once it is mined and stripped from its home, it loses its luster. It becomes just sand, sterile and lifeless—without a home, without roots, without memory.

What kind of world can be built from sterile and lifeless sand and land that has no roots, no history, and no memory, except for the violent extraction from its homeland?

Land was once considered the most secure and sacred ground we could stand on. Now even land, like people and commodities, can move and shift, and be smuggled and bartered for profit. Since the sand dredging began, every family in Koh Sralau has lost a family member, each one forced to migrate to other places and other countries for work. First the land gives way and then the people, and soon the entire fabric of a culture and identity is lost.

Cambodia is not new to displacement. During the Khmer Rouge regime, millions of families, including my own, were torn from their land and their home, forced to labor in work camps for a socialist-communist pipe dream. Nearly two million people died. After the regime fell, these families either returned to their home and their land or sought refuge abroad, some never to reunite with their homeland again. Over the last two decades, I’ve watched trees torn from their roots, forests burned, the earth dug up and wounded; I’ve seen families protest and demand the return of their home and their land; and large swathes of forests and small family farms replaced by vast fields of sugar cane and cassava, hydro-electric dams, and other industrial development projects. In these situations, people were moved and forests and habitats destroyed, but the land, although completely altered, always remained. And so endured a hope that a new seedling would grow from the ashes.

Never before have I witnessed the mass movement of land from one country to another, not for farming, not for housing or economic development, but for pure unadulterated entertainment. Since 2007, Singapore imported over 80 million tons of sand, worth more than $740 million, from Cambodia. Marina Bay Sands—a 55-story hotel, resort, and casino valued at $6.6 billion, which includes the land cost—is considered the most expensive stand-alone casino property in the world. Gardens by the Bay, a billion-dollar garden theme park, is built on top of 250 acres of sand or reclaimed land. The theme park purports to introduce its visitors to “a mysterious world veiled in mist,” where they can “learn about rare plants and their fast-disappearing environment”; a world grounded on “the principles of environmental sustainability.” It is ironic that a place that aims to teach concepts of environmental sustainability is literally built on a foundation that is not environmentally sustainable at all.

What kind of world can be built from sterile and lifeless sand and land that has no roots, no history, and no memory, except for the violent extraction from its homeland? And what kind of world is left behind, when roots, history, and memory have been torn from beneath our feet? It is already enough to be removed from one’s land. It is another thing entirely to have one’s land removed as well.

Change and progress are inevitable. The oceans and the mangroves teach me this and have been teaching the people of Koh Sralau for generations. Land would not be possible without the changing tides and the ocean currents that help to shape it. But it is also land that makes these currents soft, the tides predictable, the waves manageable. And with the land comes the mangroves and their web of tangled roots, where fish and crab lay their eggs; kingfisher, monkeys, and otters migrate between forests; and people take comfort in this abundance. But change that isn’t rooted in history and memory is a change that may one day crumble—if not literally, at least in the psyche of those who bear the burden of this change. And we all bear this burden as history plunges us further into a world where we have no idea what ground we are standing on, what blood has been spilled on this ground, what lives have been taken to make it possible for us to be here.

While I was in Cambodia, I traveled to the mangrove forests again but this time with a large group of young students and environmental activists, monks, and the local community. Hand in hand we walked, water rising up to our chests, and encircled the islands with a long banner of saffron cloth. The monks chanted while the students and local community chimed in, blessing the mangroves with our commitment to love and protect them. A rainbow hovered above us, reminding us we were loved and protected as well.

It is ceremonies like these that will remind us how connected and interconnected we are in this fragile but powerful web of life. And until we can remember, we will give up the greatest power that we have: to embrace one another and stand tall—like the mangroves.

As Singapore dredges sand out from beneath Cambodia’s mangrove forests, an ecosystem, a communal way of life, and one woman’s relationship to her beloved home are faced with the threat of erasure. For over a decade, the government of Cambodia has granted several private companies concessions to mine these mangrove forests for sand. Each year, millions of metric tons of sand are shipped to Singapore to enlarge this island nation’s landmass, while Cambodia destroys its only natural protection against erosion, rising sea levels, tsunamis, and hurricanes and lays waste to a vital and fragile ecosystem that thousands of families depend on for their livelihood.

By Land Made Kin

River at the Heart of the World

by Marie Mutsuki Mockett
February 3, 2021
Emergence Magazine’s Newsletter
Thanks for signing up for our newsletter (: